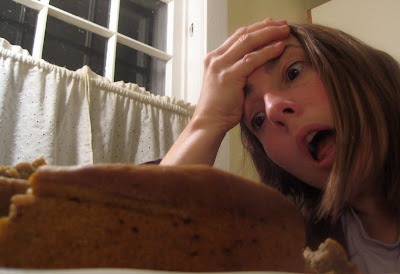 The past few days have been craptastic cooking days. Everything stinks. It all started with that Niagara grape "jelly," which wasn't so bad because I didn't expect much. But then I scored a trifecta, or hat trick, if you prefer, with dinner and dessert all within a few hours. It's so depressing. I made enchiladas again but they were DULL. I mean, it was only enchiladas, but still, how wrong could you go? At least they were edible. The cake I made which I was totally excited by, I mean, it sounded good [pumpkin bundt cake with chestnut cream filling], was ruined when I removed it from the pan. I mean entirely. It's a big mess. It tastes okay, but honestly, it wouldn't have been very good even it stayed in perfect condition.
I think I'm going to just have some broth today. Or stay out of the kitchen entirely. The good thing about cooking is that I can't quit. I have to eat. And truly, I couldn't stop cooking if I tried. But a couple of stumbles is so humbling. There's so much to learn. Sigh. I'm trying.
Posted by Julia at 9:48 AM

Email ThisBlogThis!Share to TwitterShare to FacebookShare to Pinterest
Labels: craptastic