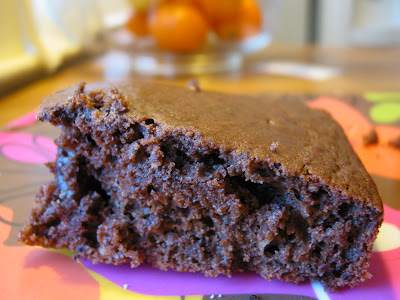 My refined sugar-less month continues. I realize that my sugar-free January is not entirely sugar-free. Laura from Glutton For Life, who has a gorgeous and beautifully written site that you should subscribe to if you haven't already, has thrown down the gauntlet and proposed I take on a real challenge of entirely no sugar (in the comments of my last post). No fruit!? To me that is almost impossible to even think about. Inconceivable! says my inner Vizzini (Wallace Shawn in The Princess Bride). So, I said maybe next year. For now, I am learning plenty by making sure to eat sweets sweetened only with fruit, honey or maple syrup. I know agave has fallen out of favor, but I might succumb to Cashewtopia's Vanilla Bean gelato. It's really amazing.

I might be a big sugar-baby, but the emotional undercurrent of this detox has taken it's toll. I've had irrational moments in which I wanted to tear into cupcakes and chocolate bars. One of these moments prompted this cake. I think one of my biggest weaknesses is a chocolate cake. I don't need much, but I so desire it. In my impatience searching for a no-refined-sugar-added recipe online, I gave up when cakes with a 1/2 cup of honey also added a cup of sugar! That is an incredible amount of sugar, in my opinion. So, I riffed on some easy cakes in my repertoire and came up with this. It completely satisfied. And, ever the addict, although this cake is pleasantly not-sweet, I did drizzle some maple syrup on it and it fully squelched that cupcake piled with frosting lust I had been experiencing. It's also made in a snap. You can always add some sugar if you want, or more honey.

Mix all dry ingredients thoroughly. My baking soda and powder often clump, and so does the cocoa, so I run my fingers through to disperse any clumps. I guess I could use a sifter, but I'm sort of a hands on kind of gal.

1/3 cup of oil (vegetable oil, though I bet coconut oil would be delicious)
1/4 cup of honey
1/2 cup buttermilk (yogurt would be fine here)
1 egg
1 tablespoon of vanilla

Preheat oven to 375 degrees. Grease a square 8x8 pan. Mix wet ingredients to fully incorporate. Add to the dry ingredients quickly. Bake for about 20 to 25 minutes. 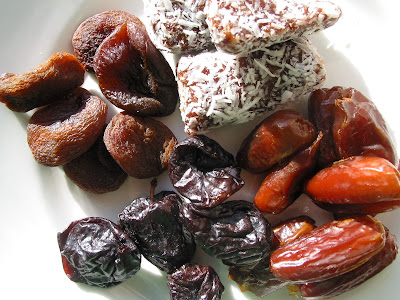 Right now I'm in our basement, which is actually the coziest room in the house. There's a wood stove right next to a rough-hewn bar, and a very 70's style rec room that has the TV, a dart board and an old Wurlitzer organ, the Funmaker edition. I like to call it the Honeycomb Hideout, for those of you oldsters who remember the old cereal commercials. The rain is coming down, freezing and slushy, drumming on the metal Bilco doors that go to the backyard. It's a miserable January day, which I'm not all that disappointed in, as the days have been quite forgiving of late. Since the new year, we've been taking hikes down along the Hudson river and up on the Shaupeneak Ridge, favorite local walks of ours. My son's latest fascination is ice, so we've been finding safe spots to poke with sticks and crunch with our boots.

Another thing I've been doing is staying the course on my New Year's detox. I have been given up meat, dairy, alcohol and the biggest one for me, sugar. The sugar rules are this: for two weeks, nothing but fruit sweetened things. At week two, I will introduce honey and maple syrup. I was encouraged to go a full month without refined sugar by Rebecca at Cakewalk; originally my goal was two weeks. We set up a Facebook page in order to discuss our sugar-free month. It's a place where we can post links to recipes we can make, or recipes we are looking forward to making when we can eat sugar again. Or maybe complain about how badly we are craving something. Or talk about the dreams we have about food. So far, I've had dreams about eating blackberry jam filled donuts and a large spread that included charcuterie and cheeses. My dreams lately have been fairly obvious.

Let's also note that as I've removed these foods from my diet, my son and husband are still eating them. That means, I'm still cooking things like chicken and dumpling soup, and personal pizzas that I can't eat. It sounds horrendous, doesn't it? But it's really not that bad. I just keep on thinking about how quickly two weeks pass. On New Year's Day, I made pan-seared duck breast with quince jam, and I didn't eat it. Not sure if I'm stupid or strong, but I really didn't feel denied. I had sauteed kale with preserved lemon and baked french fries, and they were incredibly savory.  (Did you read Mark Bittman's article and recipes in the Times magazine on going semi-vegan?)

I'm most fascinated by giving up sugar, probably because I've never done it before. Never crossed my mind! What's most interesting about it is how many things there are that you don't think have sugar in them. Like some of my homemade pickles. Oops! Forgot they have sugar. Or almost all condiments, aside from mustard and soy sauce or tamari. I realized that I pop a piece of gum or a pastille more often than I thought. And I knew this, but coming to terms with it was hard: how many muffins, pancakes, cookies or sweet breads I eat. I don't think the baked goods I eat are entirely bad for me, as they are homemade and I always lower the sugar, but they are pervasive.

One of the reasons I gave up sugar is that I need to be more responsible with it. This idea comes from watching my son start to have a similar relationship to sugar. I was starting to see how most of his diet was in some way sweet: toast with jam, peanut butter and jelly, yogurt with fruit. He used to eat everything, but slowly he's begun to refuse the savory items. In the short time I've giving up sugar, he's most certainly been eating better too.

I think the best thing I've learned, so far, from giving these things up, especially the sugar, is that you become more thoughtful about them. I think a big problem with how people eat today is that they are attached to craving something. People used to eat the same thing everyday, with special things every once in a while. Now we can have those special things every day, whenever we want.

Another benefit of cramping your style is that you get out of your cooking ruts. I found that when I needed a quick snack I would most often melt cheese on top of something. If you're concerned at all about your weight, you'll agree that this is not a good idea. Now I keep a container of brown rice in the fridge. My quick indulgent snack is rice with avocado on top, sprinkled with a bit of tamari. (Not that I will ever give up grilled cheese sandwiches. They are one of the best things in life.)

The foods that I am allowed are better than I ever thought. The other night I was craving a sweet and I ended up with a banana. And it was one of the best bananas I've had in a long time. There's no doubt that the reason being was because of giving up sugar. My palate has been cleansed. My best friends for the first two weeks have been fruit and dried fruit. And it's amazing how sweet they are. Now I'm on to honey and maple syrup, and I must say I am breathing a sigh of relief. It's really easy to make things with those two, and I won't feel so denied. However, I'm still dreaming of that jelly donut.

Here's some of the things I had to sweeten things up:

Apple Cider Syrup: This is a brilliant thing to have on hand. Lots of recipes add sugar, but really all you need to do is boil down apple cider. I used 8 cups and boiled it down to almost 1 cup. It's not super sweet, and has tons of deep apple flavor.

Applesauce: I like to make a chunky version with a few pounds of mixed apples, a little  more than a splash of apple cider, a tablespoon of apple cider vinegar, and a sprinkle of cinnamon. The vinegar boosts the natural sweetness of the apples, and, along with the cider, also deepens the apple flavor.

Dried Fruit and Nut Balls: Sounds dismal, right? A handful of apricots and a handful of almonds thrown in a food processor, with a little cider syrup to bind are just amazing, actually. There are a ton of variations on the internet. I'm going to make some with some cocoa added today.

Banana Cocoa Muffins: This link is to a great article on NPR about baking with sweet alternatives. I made the muffins, scroll down to see the recipe, and they were great.

Fruit-Sweetened Jam: Whoah, this was a revelation for me. We eat jam everyday. It's my profession now! But you know what, that's a lot of sugar in there. I just made a strawberry raspberry jam with Pomona's pectin, and it does the trick. I can't believe I've never done this before. Now, our everyday jam is no-sugar, and my regular jams (for my personal stash I use about 60% sugar) are for special times.

Vegan Fruit-Sweetened Applesauce Cake: I ate this so quickly that I didn't even take a picture. My son loved it too! I want to develop a banana bread and carrot cake version, too.

Did you give anything up? Have you given up sugar? What did you eat? I'd love to know.