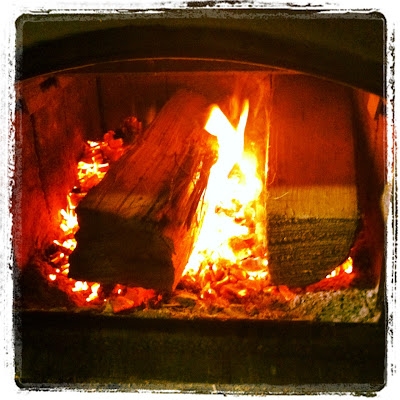 
Eat more soup! When the cold weather comes around my house, soup season begins. It's, in most cases, the quickest, cheapest, and healthiest thing for breakfast, lunch or and/or dinner.

The soup above came about from some extreme frugality. A bag of bones came with my half-pig order. Because the freezer was so full, I immediately made some stock from the meaty bones. I roasted the bones until browned, picked the meat off them, and then made the stock with the bones. With two large quart containers of wiggly stock in the fridge and a pint of picked roasted meat, I was armored against the new war on winter. One night, craving a pho-ish kind of dish, I poured one of the quarts into my soup pot, and added a good pour of tamari, and some fish sauce. No spices, instead, once boiling I threw in some sliced scallions and dried udon noodles. While this was happening, the shredded leftover meat sizzled in a hot cast iron pan, making it crispy and chewy. A bowl, some broth and noodles, topped with that sticky meat: and it was just what was needed for dinner. Taking all of fifteen minutes. Soup!!

Then, there's this one: a soup that turned into a meal, and then the meal turned back into the soup. A full circle, if you will. Roasted celeriac and butternut squash, pureed and married to turkey stock (I'm pretty sure there wasn't even an onion in this) turned into a velvety soup topped with rosemary olive oil. (Here's my plug for a Vitamix: I love immersion blenders, to be sure, but it really has nothing on the velvet-making power of the Vitamix.)

The next day, I had a leftover baguette (which always makes me happy--I buy more than I need because the benefits of day old bread are many) that I wanted to make into a savory bread pudding. I used the leftover soup, buttermilk, some cheese and eggs--the standard bread pudding mixture--and within less than an hour (that's mostly baking time) I had a main course to be served aside a salad. Seemingly healthy, but I made a warm bacon dressing for the salad. Oops.

And fish chowder. May a winter never go by without fish chowder. And to think that dark thought is not so far-fetched! Sad, but true. Aside from the fish, this is a "pantry essential dish," like many other soups. That is, you can make it with what you have in the house. An onion, bay leaf, a potato, butter and some milk. This is a traditional New England-style chowder. (Say it! Chowdah!) to be sure. There are a million variations. And we will get to them. It's only December. We have plenty of time.

p.s. I feel compelled to apologize for the shoddy pictures; when I am about to eat my concentration goes out the window!
Posted by Julia at 8:41 AM 6 comments: