A week or two ago I went for a winding ride, which is always a pleasure this time of year. The clouds were high and puffy, and the sun perfectly warm, the breeze perfectly cool, and best of all, my son, now three years old, fell asleep as we drove. The nap is a rarity these days, but for the most part, it's still very welcome. You know when you are driving and you sort of think you know where you're going, but you couldn't say precisely the way you were going? I knew where I wanted to end up, but I was guessing at the turns I was taking. Well, all the turns I took got me to where I was going in a perfect sort of way, sort of the way you wish life went all the time. I pulled into the driveway that has a small sign saying, Locust Grove Fruit Farm. No one was there, and I was able to get out and take in the view of the Hudson, which stretched out below the fruit tree lined hill.

I let a few minutes pass before I called the number to reach someone. They answer the phone like it's their home, which it is, and I say I'm down by the barn, to buy quinces. There's some confusion even though I've called ahead, as they're older and the cell phone doesn't have the best sound. "She wants to buy quinces!" I hear the woman say loudly, and I can tell the man, her husband, finally gets it, and says he'll be right there. I've talked to the whole family, but I've talked with her the most, and we've chatted about canning, mostly. "Most people don't want to talk about canning these days," she told me, wistfully, "but I hear it's changing."

I squint in the sun at all the trees around me. When he arrives a few slow minutes later, he leads me into the barn and is quite proud to show me his quinces. "Look at these. Amazing, aren't they?" he asks, and I agree. They are gorgeous, sweet-smelling quinces, covered with a bit of fuzz, half green, a bit of yellow shining through. "People don't realize how hard this all is," he says, waving his hand at the bins of apples and quinces. We talk some more, and he shows me some pears in the large cooler, and we agree we both like Bartletts better than Boscs. I notice a few pints of raspberries off to the side, and ask if there are any more. "Nope," he says, and when I ask to buy them, he says,"they're expensive." I take them anyway, as I never got enough of them this year.

He carries the forty-pound box out to my car, though it's probably not as easy as it once was. He gives me two Bartlett pears to eat. I give him a jar of jam for his wife. As I drive home, my son still sleeping, the smell of the quinces fills the slightly hot car. I think about the quince jam I'm going to make, the jelly, and of course, some membrillo. I think of how long those quince trees have been producing; the farm has been working since 1820! It makes me feel like I've got time in a box, sweet smelling time, and I'm going home to make it last even longer.


I know that lately there is a lot of interest in quinces, although some people never stopped being interested in them. One of the daunting things about quinces is that they are so hard, you sometimes wonder how to approach them. I've been chopping up quite a few of these, and this is how I do it. How much do you love quinces? What are you making with them? Leave a link, or recipe, or both!

Autumn Musings and Lots of Apples 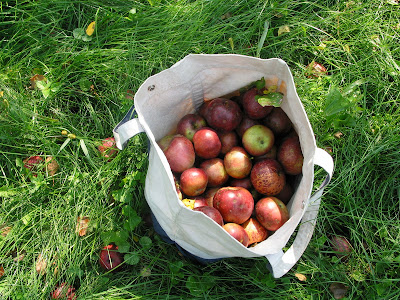 As I walk out of the house the past few mornings, along with a deep lungful of crisp air that smells like melting frost, I hear a lone cicada rasping its mating call. It's a beautifully strong sound, but filled with loss in that I know those final few clicks won't last long. The odds are stacked up against us, the cicada and me, autumn has arrived, and winter is not far off.

It's been a strange season ever since the storms Irene and Lee passed through. Aside from the obvious guillotined harvest season, there have been lots of bugs. Merciless mosquitoes, stink bugs aplenty, and now ticks are back in full force. Usually September is the month for festivals and fun, but it was dampened by continuous rain and bugs that kept you inside.  Now, we are noticing a late foliage season. Lots of my sugar maples, often bright yellow and gold, have already dropped their leaves, and those leaves were brown and crunchy from the seemingly endless rain. When I stop at farm stands, it's often the topic of conversation, and with it comes the inevitable long face for this is the season to make some money before the cold comes. People are jubilant that this weekend, touristy Columbus day weekend, is gorgeous. Thank goodness.

It's still been a busy season for me, making jam after jam after jam. Right now I am still slogging through a lot of apples (like 100 pounds a lot). This week I'll be getting a case of quinces, some concord grapes, and the thought of all this preserving just sends sort of a shiver through my mind. It's the fear of the onslaught, but of course it's exciting nonetheless, with its delicious ideas: conserves, jellies and preserves!

The beginnings of my apples have yielded me applesauce, jelly and a new favorite, Caramel Apple Jam from Linda Ziedrich's Joy of Jams, Jellies, and Other Sweet Preserves. My favorite (read: easiest) way to get through a lot of apples is to quarter them, about six pounds at a time, and just barely cover them with water in a large stock pot. Bring them to a boil and let them simmer for about ten minutes. Drain them, reserving the juice for jelly. The cooked part gets put through a food mill, and becomes a jam, butter, or unsweetened applesauce.

I make sure to cut out the blossom end of the apple before quartering them, to ensure a good jelly. There's an enzyme in that part that inhibits the pectin's strength. To make this little annoying step go quicker, I've found that a teeny tiny melon baller does the trick. Melon ballers seem obscure, but I can't tell you how much they come in handy, and not just for that vodka-soaked watermelon ball boat. (Do you know what I'm talking about?) Regular sized ones are perfect for coring pears.


For tons of great info on cooking and preserving apples, take a look at these great links:

Preserving Apples from Local Kitchen (the most recent post of which is Apple Bourbon Butter!)

I'd love to hear what you are preserving this autumn. Leave a comment!
Posted by Julia at 10:47 AM 11 comments: