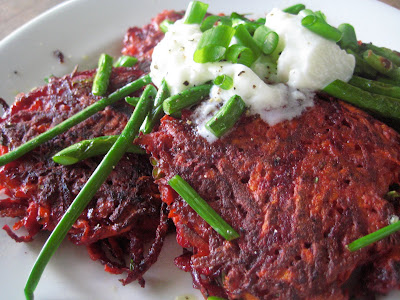 Or fritters. Or whatever you want to call them. But once you start getting good stuff from the garden you go crazy on the salads, and just a drizzle of olive oil is enough dressing. But after the thrill is gone, you start to crave something crispy or fattening. Or at least I do. That's where vegetable pancakes come in. Any amount of vegetable, tubers or squash or whatever, can be grated and mixed with an egg or two, some flour (anywhere from one or two tablespoons to a quarter cup), seasoning and then fried up in some nice olive oil. Put a dollop of yogurt or sour cream and some fresh chopped herbs on top and you have a pretty nice meal that didn't take all that much time, or heat in the kitchen. You could also bake them in a 350 degree oven if you are worried about the frying, but seriously, the frying is what I'm talking about. You could grate some cardboard and fry it up and I'd be chomping on it, happy as a clam.
It's getting hot enough that I'm starting to forget to eat because I'm just too hot and lazy. I should be so lucky to forget to eat, right? Good thing there are no beaches here in the Hudson Valley. I recently had a run in with a half-gallon of cream which led me into this kind of trouble: pot de creme, strawberry ice cream, butter, etc. How about a salad with some French lentils tossed with olive oil, red wine vinegar, cumin, garlic, salt, pepper, a goodly amount of preserved lemon, loads of fresh parsley and scallion, and topped with some grilled chicken? To be honest, I see the words grilled chicken breast and I yawn, but it's good stuff. It's just because that's all we eat now that we bought forty pounds of local and humanely raised Murray's chickens.
I'm on my way to the fine city of Montreal in a bit, to indulge in all sorts of luxe items and to visit with some wonderful friends. How cool is that? I think I might have a cheese frenzy while I'm gone. When I get back I'm going to cleanse the dairy (and alcohol?) from my system for a bit. I'm also going to catch up on all the cool things that happened in June that kept me living, and not documenting, life. Like meeting so many can jammers that I met through Tigress' Can Jam: Sarah from Toronto Tasting Notes, Shae from Hitchhiking to Heaven, Kate from Hip Girl's Guide to Homemaking, and Tigress herself, from Tigress in a Jam and Tigress in a Pickle. (I already talked about meeting Doris and Jilly Cooks here.) I've also been doing some freelance pickling for a local drinking establishment, and just took a meat curing class with Peter at Qui Si Mangia Bene. Whew. That's a lot of links. That's making me tired enough to go drink some super cold rosé. You don't drink it you say? Check out Peter's FAQ on rosé and change your mind.
Posted by Julia at 1:35 PM 6 comments: For this month's installment of the Tigress Can Jam, the pick of the month, courtesy of the amazingly prolific and expansive Joel and Dana of Well Preserved, was berries. I can't wait for the round-up on this one. Who doesn't love berries? There are so many of them, and because this season has been incredibly early, we are rolling in them right about now. My strawberry patch stopped producing a while ago, and I thankfully caught the very end of the season at a local organic strawberry farm just the other day. I've gone across the Hudson river to pick black, red and pink currants, as my three highly productive bushes got completely cleaned out one day. (I think the culprit was a chipmunk and some birds. My fault I didn't have them netted.) Raspberries are everywhere in the wild, the small black variety and wineberries, a similar wild raspberry. The big red ones are right on their heels. And though elderberries are the size of a poppy seed, their flowers are everywhere and can make a nice syrup or liqueur. So. What do make? 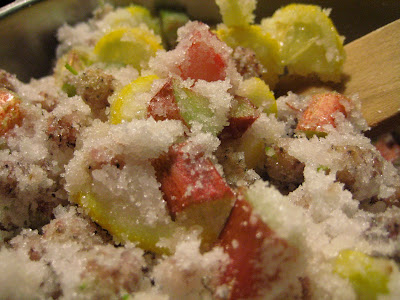 A few years back, there was a small mulberry tree grappling for a space among a thatch of honeysuckle bushes. I cut back all the bushes and let the tree grow. Mulberry trees are the forgotten berry tree, even though they are everywhere and seedling pop up in cement cracks. I think people used to appreciate them more, but now they are considered just a nuisance. When I was a child, we had a large black-berried tree right next to the back door. We would spend a good portion of the summer in it. Mulberry trees are great for climbing, they have low limbs and many of them. My mother once told me a story about how mulberry tree leaves were what silk worms were fed in order to create silk. I promptly began eating the leaves, which are edible, and at the time, quite tasty. One day, my mother decided that she had had enough of the big, black berries staining the doorway, and it was cut down. I was a miserable teenager at the time, so I'm sure I pretended to not care or was outraged and indignant, one of the two---or perhaps both.
This year I was thrilled when the tree promised to have a good yield of berries. We have a white mulberry tree, which pales in comparison to the trees with black berries, both in color and taste. My son, who is almost two, and I would walk past the tree every day to let out the chickens and graze on the berries. They are mild and lack acidity, but they are sweet and free for the taking. They lasted about two weeks, and at the end they really plumped out and took on a pinkish hue. Then, suddenly the birds took over, and they declared the season over. I neglected to take a picture of them while they were hanging in the tree. Early in the morning, it's hard to remember the camera, which isn't so bad a thing really. But I now realize there isn't one good picture of the white mulberries. Can you see them floating around with the rhubarb and lemon down there in the pot? 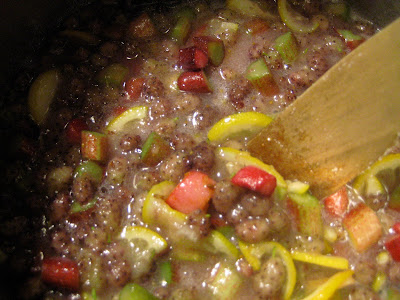 This jam didn't gel up too much, just like my rhubarb jam from last month, but it's incredibly delicious. I think there was a bit too much sugar in it. The taste is sweet and yet still tart, and the texture is wonderful. Strands of chewy lemon, chunks of rhubarb, and mulberries all retained their shape and became candied.
2 cups of mulberries (don't worry about those little stems, you can eat them!)
1 cup of rhubarb, diced
1 medium lemon, sliced finely
3 cups of sugar
Boil in a heavy pot until gel stage is reached, usually at around 220 degrees if you are using a thermometer. Process in boiling water for ten minutes. Makes three half-pints. 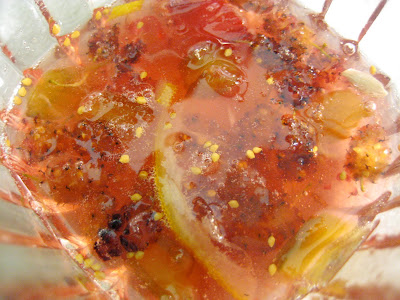 A walk down the block finds many black-berried mulberry trees, and the other day when I was looking out for a particularly good branch I had found earlier, I spied, thankfully, a large black rat snake, hanging out in the branch. Do snakes eat mulberries? Or was it just a really nice hot spot? I didn't linger to ask.
Posted by Julia at 12:00 PM 18 comments: 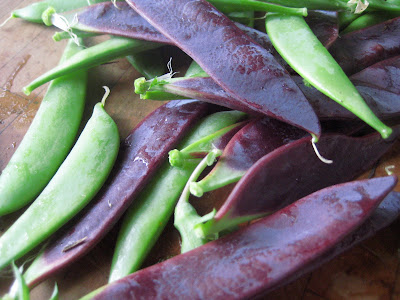 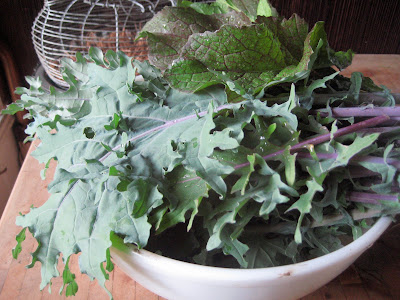 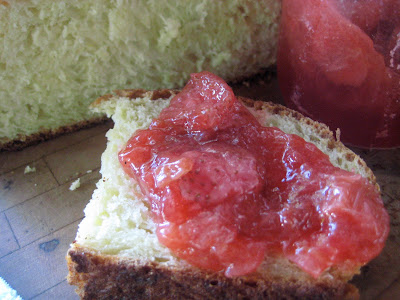 Oops! How did that strawberry rhubarb jam on no-knead challah bread get in there? 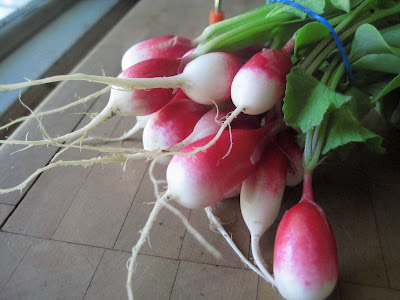 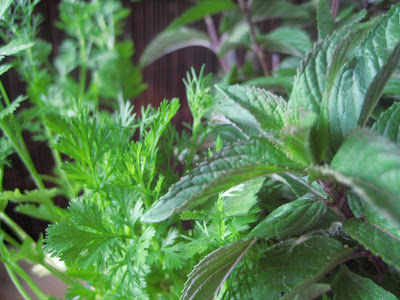 Chocolate Mint and Cilantro.
Posted by Julia at 9:15 PM 12 comments:

Email ThisBlogThis!Share to TwitterShare to FacebookShare to Pinterest
Labels: garden 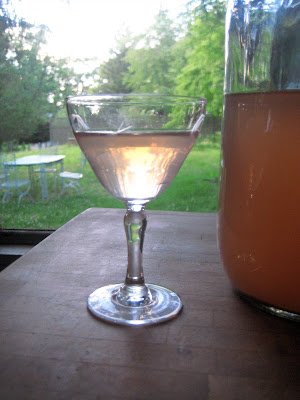 Last week I finally tried the fabled Rhubarb Liqueur I had made, which was inspired by this post from Mostly Foodstuffs. There's a bit of a wait, but it is as good as it was heralded to be. I was lucky enough to get a visit from intrepid preserver, Doris the Goat, of Doris and Jilly Cook who was teaching a class on preserving at the nearby Omega Institute. I thought what better time to break out the rhubarb booze? Maybe that's why Doris was such a wonderful guest, not only providing helpful information on my new (used) pressure canner but arriving with a jar of this in hand. Isn't it a wonderful world?
Even though it was daytime, we clinked my special little glasses, while the rest of her crew snoozed on the hammock. Doris' summary of the libation? "It's rhubarb pie in a glass!" And indeed it was. It came out perfectly; not too sweet, smells exactly of rhubarb, light pink color, and strangely (dangerously?) enough it doesn't even taste like alcohol. In fact, the night before I had tried it hoping it was good, because I talked it up and wanted to make sure I could back up that talk. I added gin to it because it just wasn't tasting like a pre-dinner cocktail. However, as an postprandial drink, it is superb on it's own. No ice, just basement temperature, served up neat.
The original recipe calls for Everclear or grain alcohol, but I chose the ever handy, and legal in my state, vodka. It has been said that the 90 percent alcohol content of Everclear pulls out more fruit essence, but I thought the vodka did an incredible job. Talk of alcohol soaked in fruit always makes people excited; it's that good. I made brandied apricots last year, and the cordial it made was stellar. I've got a few more quart jars steeping all sorts of things. What are you soaking in alcohol these days? Besides yourself, that is.
N.B. Deena, from Mostly Foodstuffs, made a good point in the comments about the lack of alcoholic kick in my liqueur, and that is: her recipe used grain alcohol, and the sugar levels were adjusted thusly. I used the milder vodka and should have taken down the sugar. Be warned!
Posted by Julia at 1:21 PM 17 comments: 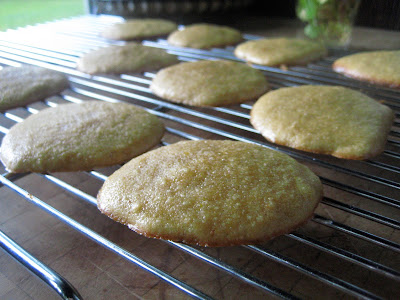 My new favorite cookie. How can you not love a cookie that you can make when camping? How can you not love a cookie with three ingredients, one of them (the sugar) optional? For those who follow a gluten free diet, you are in luck! I found the recipe for these almond butter cookies at ShowFood Chef and put it on the top of the list immediately. I had a bunch of almonds that I needed to attend to and here was my opportunity. Ever since I saw a bit on making almond butter on The Wynk (which I can't find now), I've been thinking about it. It was one of those moments when you smack your forehead and think, of course! I have nuts, et voila, I can make nut butter. Sometimes I'm a little thick.
So, making nut butter was a breeze, just whiz up the nuts and add a little olive oil to make it smooth. There's a bunch of things to read on it if you need more information, but basically I roasted the nuts at 350 degrees for about eight minutes, until toasty. Then I whizzed it in the food processor for a while, scraping down the sides every so often--you want to wait until it balls up, then it will break down again and turn creamy. It's then that you can add a little stream of olive oil to further the creaminess. I didn't add much, perhaps a tablespoon?
Cathy has great directions on this recipe, so I'm not going to foul things up and omit a detail, which I tend to do in my haste to get things done. Just go and check out the recipe and make these little cookies. Of course, peanut butter will do just fine, too! 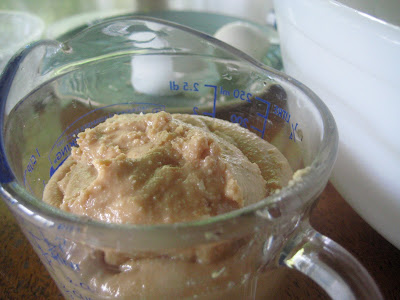