Canning Tomato Sauce with a Vitamix 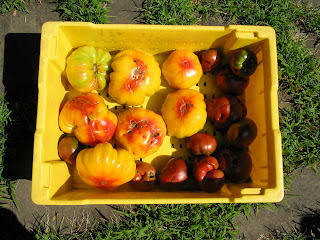 Do you have a Vitamix? I just was gifted one, and it came at the perfect time: just when I was about to can 150 pounds of tomatoes. Tomato season is about done in my parts, so I could have said this earlier, but for future reference, if you have one of these splendiferous blenders you can cut your tomato saucing time in half. This is starting to sound like a commercial, but...No peeling! No straining!

I chopped my tomatoes into big chunks, and, as you can see below, they were huge. I did chop out some cores that seemed a big woody. Put them all in the blender, seeds, skins and all, and turn it on, quickly go from 1 to 10, and then to high, until all the seeds are gone, about a minute or less. Each batch gets tossed into a big stockpot on a low flame to heat, while you continue the process. Proceed with your usual tomato saucing/canning techniques.

That's how I canned 150 pounds of tomatoes this year by myself! 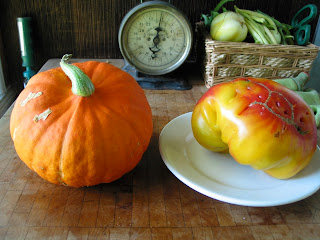 Well, this is the only picture I have at the moment, so it's not much of a seller, but I can assure you that this pâté will make you the belle of the ball. Maybe for ten minutes. To the one person who is eating it all. But that's okay. I'll take any recognition I can get. But seriously, can you puree something? Well then you can make some excellent pâté. The real question is: can you puree pork liver? Because, you know, some people think they can't. But you can!

I'll be honest, the blubbery mass that is the pig's liver is a bit slippery and a tad smelly, in a fresh liver kind of way. When I received my half of a pig, I had asked for all the organs and I received a huge liver. I think it was more than one liver. So, with two pounds of liver on my hands I made the easiest thing I could find, which was this recipe from The New York Times Cookbook, the original from 1961, edited by Craig Claiborne.

Because no one can eat that much pâté, I wondered and searched for a tip on freezing. And I found it from none other than Hugh Fearnley-Whittingstall (the tip is the very last sentence of the article!). The trick to freezing pâté is to freeze it before you cook it! Et voila. I did this, and that's why I have one pan waiting for the holidays. The other was unveiled at a friend's birthday party, surrounded by slices of pickled pears, and I can attest, as well as one other party attendee, that it was superb.

Use some rendered fat to grease two bread pans well. I used ceramic loaf pans. Purée the liver, eggs, brandy and cream. Add the flour, onion and fat a little at a time. It will be quite a lot of pinkish liquid meat. Pour into a bowl and add the seasonings, mix well. Pour into your pan and cover with plastic wrap, so that the wrap clings to the purée. Then cover well with aluminum. Freeze on a level shelf.

When you want to cook it, pull it a good day before you want to cook it. Put it in the fridge and let it thaw slowly. Once fully defrosted pull off the aluminum so you can remove the plastic wrap. Put the aluminum foil back on. Bake in a pan of water in a 325 degree oven for about two hours. There's no toothpick method here, you just have to know what your looking for. I pulled mine when the edges were pulling from the sides and getting dark. Serve on a platter with pickled pears.

This post is for the ninth installment of Charcutepalooza! 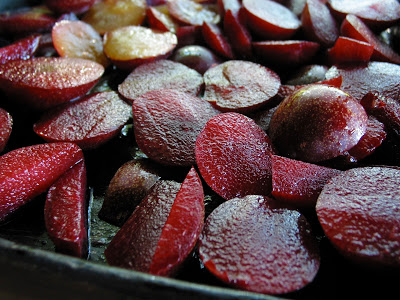 These cream cheese wafers? cookies? pastries? are super easy to make. I used a 1/2 stick of butter and 6 ounces of cream cheese, pulsing them in the food processor with a quarter teaspoon of salt and a cup of flour, until they were thoroughly combined and looked like coarse gravel. Dumped into a bowl, you can then form the dough with a few kneads of your hands. Let the dough chill for an hour (or a few days, like I did). Roll and cut out circles. I egg washed and topped them with sesame seeds. Bake them for 8 to 10 minutes at 400 degrees. Make sure to let them cool well. If you eat them immediately they won't be quite as good---believe me! But do make sure to eat them up right within a day or two. They don't age well. This makes about twenty wafers.
Posted by Julia at 9:23 AM 6 comments: