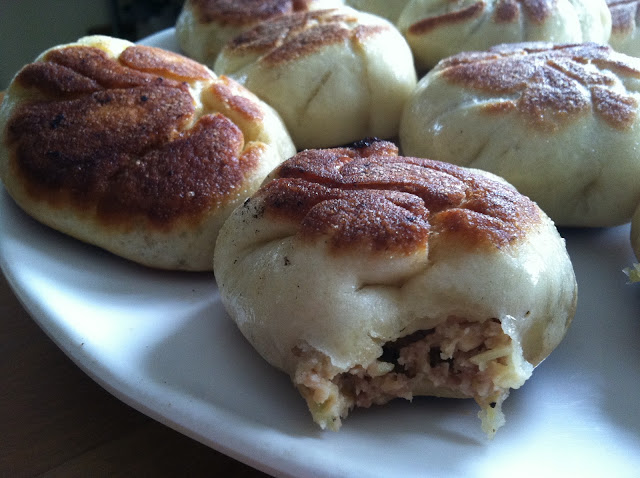 I sadly flaked out on the first round of Cook the Books (hosted by Grow and Resist and Oh, Briggsy...). I was mired in a January funk that I couldn't find my way out of. I did make a few things from the excellent Around My French Table by Dorie Greenspan, but nothing felt triumphant (and I'm sure that's nothing to do with the book--I take full responsibility). I did feel triumphant, however, with this month's book, Asian Dumplings by Andrea Nguyen. I just got the book out from the library on Thursday, so I had to get cooking to post this weekend. Having a cold didn't stop me from making two different recipes--that's how approachable this stuff is. 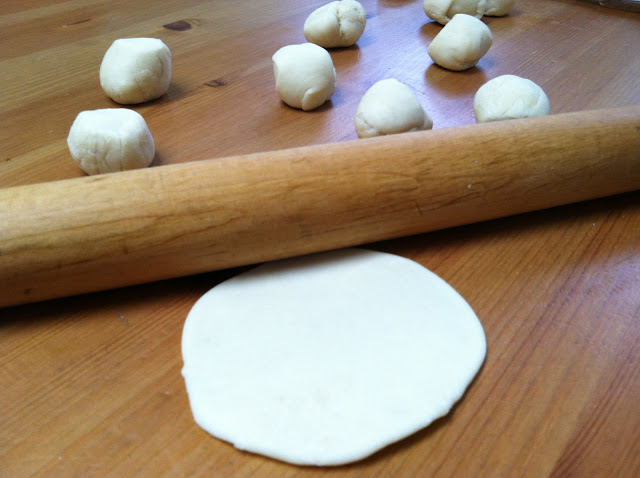 Andrea Nuguyen is a stellar teacher; it shows through the pages. Every step is fully detailed. Her thoroughness is thoughtful and never pushy. I first took on the pan-fried pork and scallion buns because I had everything in house. Sort of. For the filling I fudged a little and used chicken thigh meat, leeks, and salt pork. Really, aren't the idea of dumplings to use up what you have? The dough recipe was exquisite: soft and squishy, not too sweet, and because of working it in the food processor, very accessible.

I already see that these dumplings will now be a part of my routine meal cooking. They are called baozi (mini bao) but I think mine were probably regular sized. I will absolutely have to buy this book. When you live in the sticks like me, you don't have access to  a few squishy bao or a good bowl of dumplings or, at least without a long drive, or some cash. They are neither cheap nor plentiful. Now I have it covered. 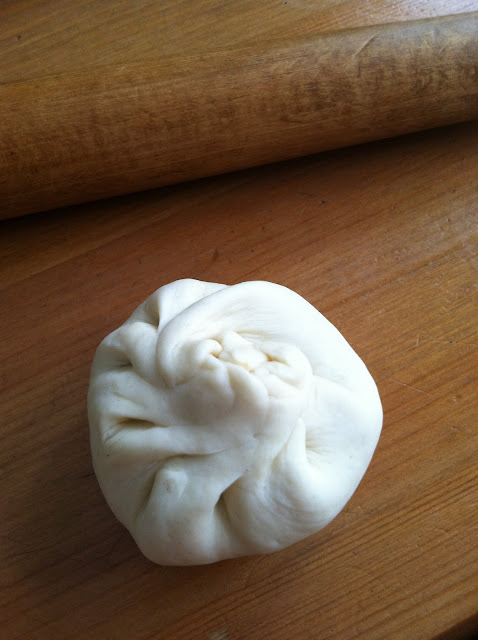 Now I must admit: I've made a ton of filled pastas in my life. It was a household task growing up to make ravioli, tortelli or cappilletti, so my fingers are still nimble and know the language of dough folding. I felt like quite a natural at the beginning. I always thought that the exquisite soup dumplings I got were such things of beauty, twirled up so neatly. How did they do it?? I wondered. Well, it's really nothing at all I realized, especially when you make enough of them. Another thing I loved learning was the technique for pan frying these mini-bao: to first fry, then pour water into the hot oily pan to steam. So simple! 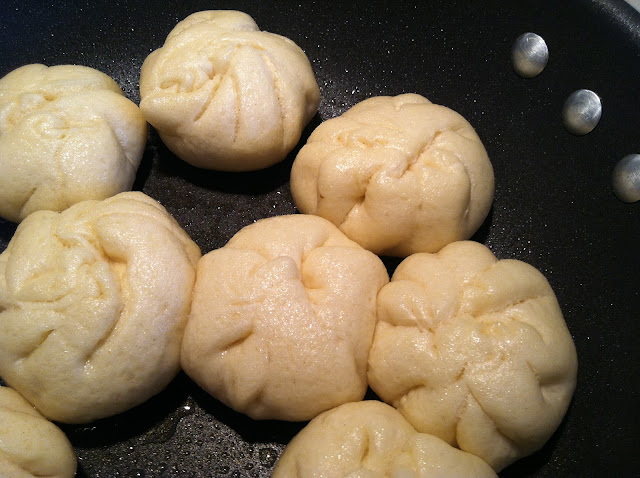 My second triumph was the pork and napa cabbage water dumplings. I was intrigued by the technique of using just boiled water to form the simple dumpling dough, whose only other ingredient was flour. I did go out and buy cabbage and scallions this time, but I used (mostly fat) pork belly instead of the fatty pork asked for, so my fat-to-meat ratio was skewed to the fat side. They were very rich, but not overly so. My one mistake was to not really squeeze the water thoroughly from the cabbage. You must do it otherwise your dumplings will be a little wet. But in the end it was just fine. Every single one was eaten! 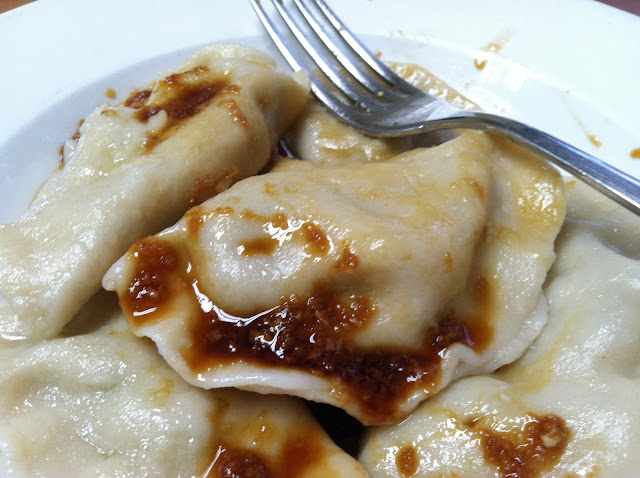 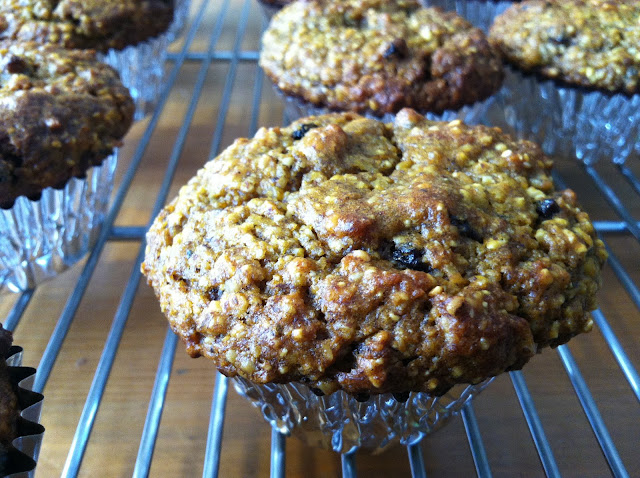 I don't know what else to call these muffins. They are a riff on morning glory muffins, and I made them because I wanted a satisfying muffin with no added sugar. They have everything in them: squash, nuts, raisins, coconut, bananas and applesauce. And a bunch of other stuff. When I have one, I don't need to eat another thing for a while. They satisfy my sweet tooth even though they are not sweet. I've been noticing: the best thing about changing your sugar habit is that things don't need to be too sweet to calm your sweet tooth anymore.

I used two recipes to guide me in making these muffins. One is from Rebecca at Cakewalk, who made these carrot banana muffins which are very good, and the other was from Paleo Comfort Foods for morning glory muffins, which are also good but I would add the cider vinegar to make them a bit lighter. Do not leave out the vinegar! It activates the baking soda, and you won't taste it. Not only do these muffins have no added sugar, but they are also gluten free. By the by, I've been noticing an uptick in the paleo craze. Is it just me? Maybe I'm noticing it because it creates some interesting ideas in making desserts.

2 cups of nut meal (I used a blend of almonds, pecans and walnuts blended in my food processor)
2 teaspoons of baking soda
1/2 teaspoon of salt

Preheat oven to 325. Line a muffin pan with cupcake liners. (I usually don't do this, but for these muffins, I think it's worthwhile.)

Mix together dry ingredients (first five ingredients). Whisk up the eggs with the rest of the ingredients. Add the wet to dry quickly. Fill the muffin liners up to the top--they won't rise too much so they can be quite full. Bake them for 30 minutes, until a toothpick comes out clean and the tops have formed a golden shell.
Posted by Julia at 5:42 PM 18 comments: 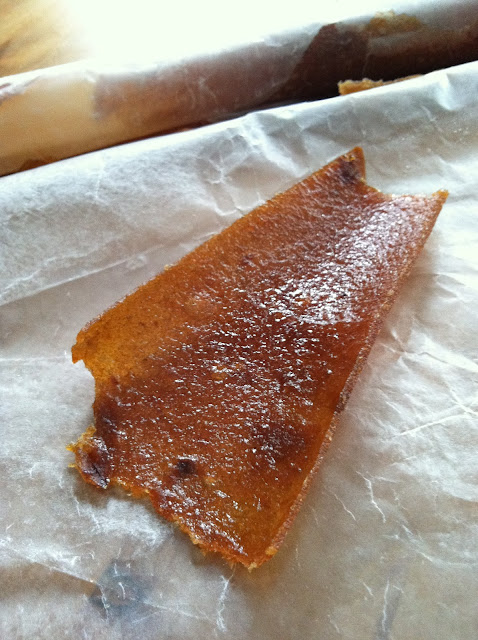 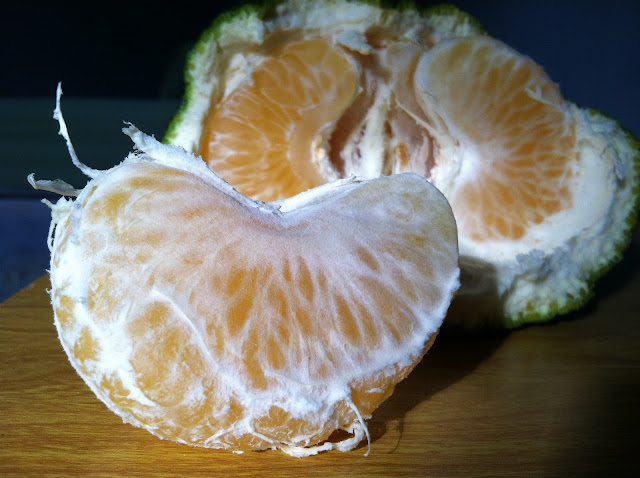 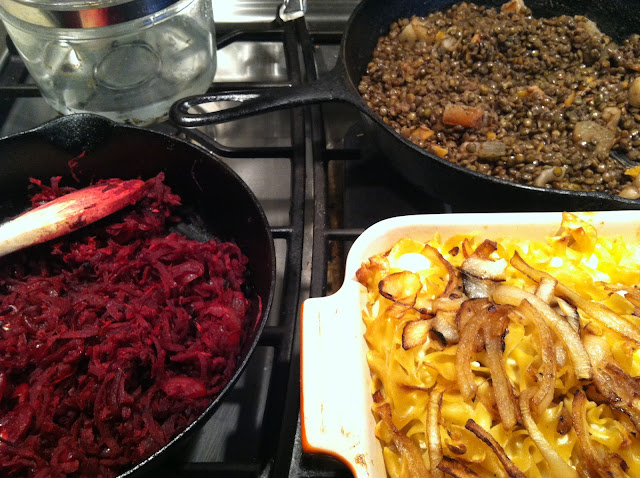 This kind of eating is one of the things I love about winter. That you can make so much out of so little always satisfies me on a deep level. I told Steve not to expect much out of dinner--he saw the lentils, and shrugged, thinking of a skimpy meal of a bean sliced three ways--but then I came up with this. He shouldn't really listen to me.

The beets were grated and added to some sauteed onions. Sprinkled with salt and pepper, I cooked them about ten minutes--enough to be cooked but still crunchy--and at the last moment added a tablespoon of horseradish. This is my new favorite side. If you add a shallot to the onions, so much the better.

The lentils are just cooked until tender, then added to a pan of salt pork cooking in a hot skillet. I added some stock, some chopped preserved lemon, pepper. That's it. And the kugel is a riff on a savory one from Saveur. Mine had feta, greek yogurt, olive oil, etc. It came out amazing. Just finished the last of it for lunch today.

Ah, winter! I've been slowly coming out of my cooking funk, and this meal was a real sign of that. Immediately when I saw these dishes all together, I thought: I'm out! It's been dreadfully cold and icy, no snow but a few dry flakes here and there. I've been going easy on myself this winter: allowing glasses of wine at night by the wood stove, watching my shows, putting my feet up. (My new show is The House of Eliott; if you have a Downton Abbey crush, then you'll love this. I think it's much better.) All of this quietness  is good, but I still feel the eagle eye within me watching the skies for spring. I have seen bluebirds flitting about, but still the ground is very much frozen. I look longingly at the garden. Soon, my lovelies, soon.
Posted by Julia at 11:59 AM 6 comments: