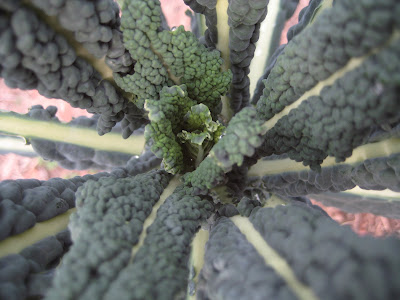 When I am feeling bummy, like this morning, I know that there are a few things that will pick me up at least a little, if not turn my mood totally around. One of those things is to go out into the garden and put myself to work. I get totally distracted when I'm working in the garden, or out for a walk for that matter, and that is always a good thing. So, I went out and looked at my incredible kale. It's totally healthy but sadly over run by cabbage moth worms, but even though I can't eat the leaves, gosh, aren't they beautiful? And then I sowed some buckwheat seed for a green cover crop. Did I do it too late? I don't care; at least I did it, finally, after talking about doing winter cover crops for so long. It was nice to water the dirt and lay crisp leaves over it all, wondering what would come of it all. I began to feel a little more human.
Then I did another thing that helps on these kind of days. I went out and bought some dark chocolate and marzipan. Just one of those little square Ritter chocolate bars. I ate half of one in the car and I started to revive a little more.
Then I had some white wine outside while the sun went down. Or faded away into the gray, as it was that kind of day. Gray notwithstanding, I was still feeling better. The bumpy day was fizzing into a smooth finish.
Then, to really end the sadness, I made pizzas with a whole wheat crust. One with beets, red onions, parsley and blue cheese. The other with a sun-dried tomato bruschetta (jarred) and cheese. Now that's pretty much the way to coax out a contented sigh, yes? In the meantime, let's hope for tomorrow. 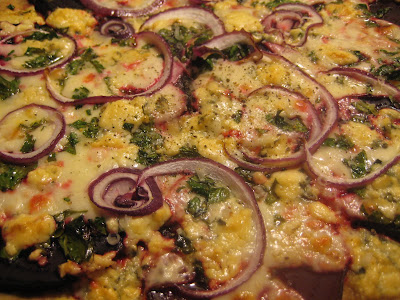