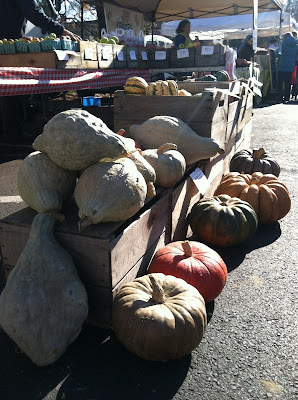 Today was another glorious late fall day. That would be: blue sky, no clouds, a bit brisk, but warm in the sun. Sadly, my son has been ill, and we've been staying and playing a bit indoors. I'm sad he's sick, but also sad to be indoors on such glorious days! Thankfully, I was able to run around a little bit. We went to the Rhinebeck Farmers' Market in the morning for their last day before Winter market starts. I bought a few packs of their lovely linocut card packs, designed by Gina Palmer, in preparation for gift giving for the holidays. I'm trying my hardest to shop small and local. I picked up a growler of Breezy Hill Orchard's Hard Cider for our Thanksgiving day meal. It's going to be hard not to break into it. I also bought some of their pesticide-free cranberries, because right now I want to put cranberries into everything. 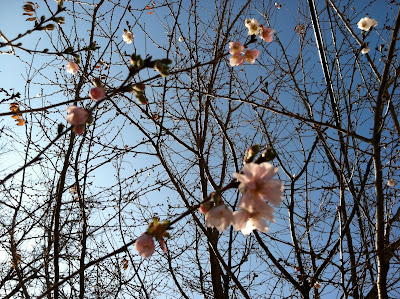 Can you believe this cherry tree? Why is it blooming in November? It's not even warm or anything. And look at the blue of the sky! I love winter for this kind of blue sky. I'm not sure you can tell in a photo, but there's a certain "crisp" quality to the blue of the sky in the winter. I guess it must be the way the sun hits us. I hate to ruin the moment, but it was right when I was getting caught up taking pictures of this pretty tree that I stepped in some dog business. Grrr. 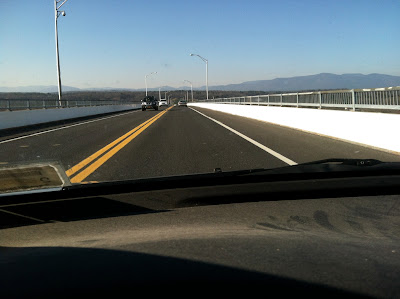 I'm not good at taking pictures of vistas while driving, and you know what? I shouldn't be. I took one quick picture and stopped because, I realized I was being an idiot. But it's one of my favorite views, driving West over the Kingston-Rhinecliff bridge. This doesn't capture the half of it---the magnificent outline of the Catskills, the Hudson River on either side, and the Shawangunks far to the South, and the Marlboro Ridge closer in. I used to work in Dutchess county, and this was a daily drive, so I've studied this view extensively. No wonder all the big estates were built on the East side of the river, so they would have this magnificent view. I would often think looking at this view upon driving home from work: I love where I live! Because sometimes you forget. 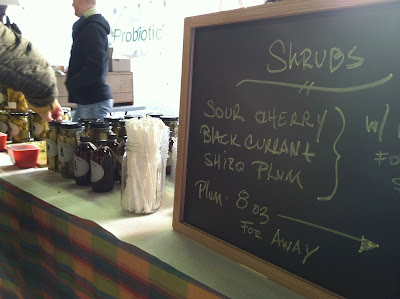 But not today. Later in the afternoon, I was able to sneak off to the Rosendale Pickle Fest where I felt like I was on a mission to get in and get out with my goods without getting trampled or getting stabbed with a toothpick. I usually go in the morning, and it's much more leisurely. The quality of the pickles over the years has really gone up. Don't mind the flea-markety stuff, just go right to the pickle pavilion. I visited Sour Puss Pickles and got their prize-winning pickled ramps that I missed out on last year. And they had shrubs for sale! How cool is that?

I was also really happy to see local gem, Gomen Kudasai selling their wares. I wanted to buy everything, but I was already out of cash. There was a beautiful daikon kimchi that I really need. The owner grew the daikon, she told me. No matter. It just means I have to go and eat at the restaurant.

Then I drove home in the slanting sunlight, to stack wood and make dinner.