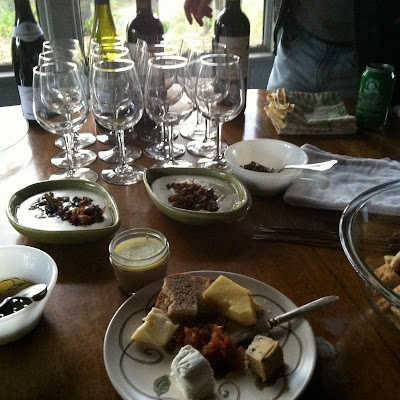 Oh, yeah, that's what I'm talking about. I had some friends over for a visit recently, and as usual, I made a decadent fat-filled meal. I didn't try to, it just happened. At one point we had a wine tasting with our cheese plate, replete with pickled tarragon green beans and quince-rosemary jam. We also gathered forces to replicate a dish that we used to love back when we all worked together at a restaurant in NYC. It was a blue cheese fondue made with Maytag blue cheese, topped with caramelized shallots and rosemary oil. It was SO good. I didn't write down what I did, so this isn't an actual recipe. If you make it, know that you are on your own. I needed to get down what I could though, so I could make this again one day. I thought it was easy to make (but there were three of us!), and you could have the shallots and oil made before hand.

Combine all in a sturdy saucepan that has been rubbed with a clove of garlic. Keep on low heat and whisk until smooth. It can be bubbling slowly, but don't let it boil.

This is where we got confused: should we add cornstarch, like many recipes recommend? Well, it was really thin without it, so I poured in a slurry (love that word!) of

1 tablespoon of cornstarch and
2 tablespoons of quince brandy (so. good.)

Pour in the mixed cornstarch and brandy (that's the slurry!) and mix constantly until it thickens, which will be about five minutes. The cornstarch was totally the right way to go. It made the perfect dipping consistency. I've tried to make this fondue before, and I am sure that not adding cornstarch was the reason it was never fully successful.

Pour into a shallow dish, top with shallots and a fat drizzle of rosemary oil. Get some wine, some bread, and dig in! If you eat enough, I swear you won't get a hangover. You will, however, need to eat brown rice for some days after to clear your arteries.

Caramelized Shallots - Slice 3 large shallots thinly and saute in a cast iron pan coated thinly in olive oil. Cook until caramelized, which took us about 45 minutes.

Rosemary Oil - lightly warm a cup of oil (I used olive oil, but you could use canola--I might do that next time so the rosemary flavor/scent doesn't compete with the olive) with a big sprig of fresh rosemary. Don't let it boil or even bubble. Once hot for ten minutes, you can just let it steep in the pan for about a half hour. Strain for use. This stuff is good to have on hand, especially to finish soups. 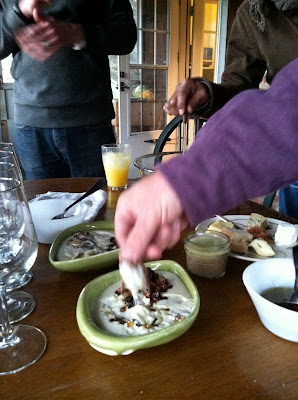