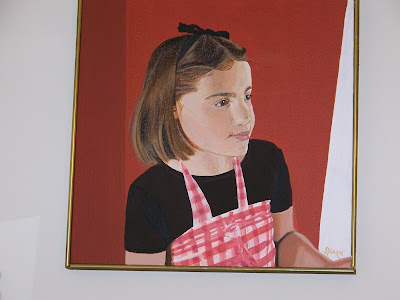 My mother called me regarding my post about tomato sauce. She wanted to make sure everybody knew that she made sauce, too, and that she was a cook in her own right. Which you have to smile at, as I am. Indeed, this is all true. Although I did tell Mom that I didn't recall her making sauce, I'm sure she did make it at some time, probably many times. And, to make sure this is clear: my mom is an amazing cook, and cooked most of the time for our family, inexhaustibly. She has taught me a million things that I can't even catalogue here. I was by her side while she made pizza dough every week. She made pretzels, sourdough bread, currant jam, clear and perfect chicken stock, plum dumplings, cinnamon rolls and hot cross buns, to name a few.

Every year during the holidays I would stand at attention while she made apple strudel, a recipe of her German heritage. I loved mixing the bread crumbs cooked in lots of butter, and watching her stretch out the dough whisper thin on an old blue and white embroidered tablecloth that was only used for this purpose, and the resulting apple "candy" as we called it: the sugary, buttery, apple-y caramel ooze from the strudel when it was done. She would often make the strudels into the shape of a J, for me, or L, for my sister. An M for my brother would happen every so often, because it was so difficult to make. If we are discussing the holidays, there was also the croissants, the anise cookies, and the kartoffelkloesse for New Year's. We had no shortage of good food in our household.

Memory is an odd thing, isn't it? What we remember is often different from others memories for the basic reason of perspective. We all see everything a little differently, and that's a nice thing, in my opinion, because otherwise things would be rather dull, wouldn't it? Above is a painting by my mother rendered from a photo that she took of me. I guess you could say it was her perspective of me. There were a series of images (I will bet there are no more than 3 or 4 of them; this was from the days of film remember). The photo I used the other day in my post was an out take; was I getting tired of posing? That's what's nice about photographs: we see a pretty good representation of what was there. But still, that representation is still "opinionated," right? I'm not positive what I was thinking when the picture was taken, I can only guess.

Goodness. I don't know exactly what I'm getting at here--just randomly writing--and therein lies the flaw of NaBloPoMo. I should be writing this into a notebook, instead I am releasing this out to the world. At least you may scroll away if you want! So, in a vein of randomness, I will leave you with this funny bit that amused me today:

http://theoatmeal.com/comics/making_things
Posted by Julia at 7:45 PM