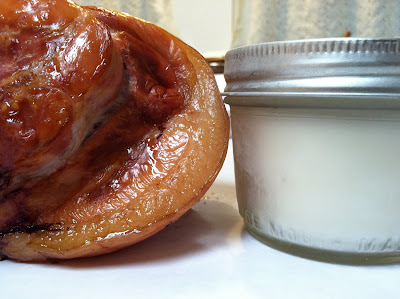 I guess it shouldn't surprise me that I have taken a photograph of a chunk of smoked meat and a jar of lard. Meat isn't often a part of a still life these days, is it? But it's what I've been doing, and I am rather proud of it. I mentioned that I picked up a half hog the other day. This is my second year in a row of doing this. Even though it's been over a year, it comes back pretty quickly. Sunday was spent putting everything in brines and such. Yesterday, it was time for the hocks to come out and dry. And today, before this storm we are in the midst of, I was to smoke them. There was no way around it. Once this pig thing is in motion, even a Nor'easter can't stop it.

I got them in the smoker at around 1 p.m. and they came out around 4 p.m., internal temperature of 150 degrees. I used cherry and apple wood, kept them at 200 degrees. This year I added to the brine some juniper and allspice to accentuate my new favorite recipe for ham hocks: jerky ham hocks. I hate to say this, because the recipe is from Jamie Oliver, but when I made this the hocks come out brilliant and gorgeous. (Does he really talk like that, or do they exaggerate it because his marketers think people find it cute?) I wrapped them up after they cooled, and stuffed them in the freezer with a shoehorn. Not really, but that thing is packed. I'm scared because I still have to fit in the ham and bacon when it's done. Better get eating!

When I got my pig, I found that they had given me the leaf lard. I had forgotten to ask for it, but they gave it to me nonetheless. I guess when I asked for the pig jowl, they knew what kind of person they were dealing with. Last year they ground my jowl up! Heavens. This year I'm curing it American-style. Why can't I find a recipe for that, please tell me? The internets are filled with guanciale recipes and techniques, but no one has one up for simple smoked jowl meat. If it's there, please direct me in the comments below. I'm curing it along the lines of savory-style bacon, and I can't wait to try it.

So, the leaf lard. I'd never seen it before, so here's a picture for you, below. The bloody bone in a bag (sounds delightful, doesn't it?) is the aitch bone from my ham. It should be called the b-aitch bone. It sucks getting it out. I sort of mangled my ham. Oh, well, I'll get it one year. Smart move this year? Asked them (Meiller's Slaughterhouse in Pine Plains, by the by) to cut the ham in half. Last year's 23-pound ham was a bit much. Now we'll have a fresh ham roast for Christmas, and cured ham throughout the winter for breakfasts and soups. The leaf lard was rendered in a crock pot, and it worked like a charm. I'll never do stovetop again. It came out snowy white, as people tell you it should. I am making an apple pie as soon as I get all this curing and smoking out of my way!