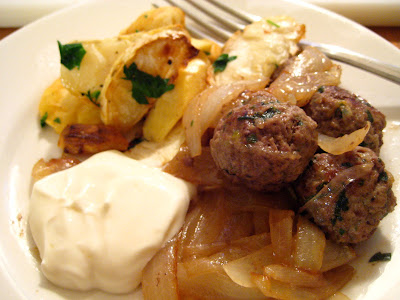 I've always been a fan of local foods. I was raised that way. We ate fresh eggs from Fanello's and would often pick up some other goods, a fresh killed chicken, perhaps. There was Albert's, by the train station, where we would get delicious bottles of milk with cream on the top that us kids would fight over. There were farm stands during the summer to supplement Mom's great garden on our little 1/8th of an acre plot. We had a strawberry patch and blueberry bushes, a mulberry tree that I would climb and hide in to snack for hours in the summer, a Queen Anne cherry tree, and raspberries down the road behind the post office. We also picked mussels and dug for clams at the beach. We bought grass-fed hormone-free meat. We bought freshly caught fish from the harbor (although a dubious practice in hindsight). This was the seventies and eighties in (or on, as the locals might say) Long Island. Amazing, right? I was raised with really good food.
As I got older I stayed close to local food. I worked in the early 90's at a restaurant called Home which was all about locally sourced or foraged foods and wines. I also worked at a wine store that sold only New York wines, Vintage New York. So, I've always been involved in local, as many people have. It's not a really new concept. But it's a concept that has been getting a lot of interest lately, and I think that's amazing. In the past few months of immersing myself in the food blog world, which is dizzying to say the least, one of the things I've most been interested in is the diligence of some locavores. It's been invigorating for me, because it's pushed me to get more involved and be more diligent myself. I work a bit harder to check labels and make sure where my food is coming from. I'm less complacent. One of the things that's hard to swallow for me about sourcing more food locally is the cost. But there are ways. And then there are concessions to be made. They are usually worthwhile. And that feels good.
After I cooked this meal last night, I realized it was mostly local. I didn't even plan on it. But the lamb is from Pine Plains, as are the Pine Island onions and the Veritas Farms celery root and the Four Winds Farm parsnips. The yogurt wasn't, but it very easily could have been (I have a weakness for greek yogurt on sale!). I realized that with just a little more thought and attention to detail, maybe a little more legwork, you can eat a little more local. Which is better than not eating local at all.
*****
In the name of local foods, would you like to take this short survey that my friend is working on? Here's some information about it:
A small team of people dedicated to the promotion and expansion of local sustainable agriculture and food are looking to better understand food purchasing habits and desires. The team has been assigned a year-long business development project as part of their studies at Antioch New England’s “Green MBA” program. The information you provide will help the team develop their business idea which seeks to connect local sustainable and organic farmers to consumers. At this point the effort is a school project only, but the team believes that it may develop into an actual local/regional business that could be replicated across the country. A summary of their final business plan will be made available later in 2010.
Posted by Julia at 10:29 AM