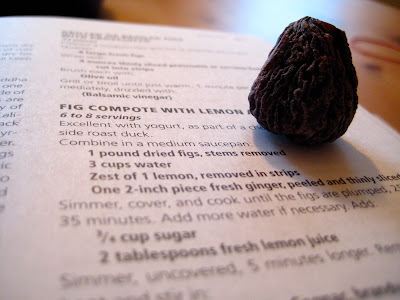 I've had some dried organic mission figs I bought on sale from the health food store that have been patiently waiting while I got swept away with all this citrus. I didn't forget about them, I just knew how patient they could be, sitting there, all wrinkly in a jar, quiet, thoughtful. I saw a great recipe for dried figs from Consider the Pantry that I will make one day, probably with Calmyrna figs. In describing the jam she mentions the taste of Fig Newtons. That sounds just blessed to me. I was also completely smitten with The Laundry's Can Jam entry, Lemon, Fig and Lavander Marmalade. It had me swooning. I was there.
But then I was twiddling through the Joy of Cooking and in the fruit section there was a little gem called Fig Compote with Lemon and Ginger. I had everything on hand. All the right amounts. Of course, I had to change a few things. And it came out heavenly. It perfumed the house. Not too sweet due to the lemon which candies, ever so slightly vanillin, and the fennel just takes it back from being completely dessert-y. It is close to a compote because I left half of the figs whole and the rest are split so those nice little seeds squoosh out. The syrup they float in is thick. I am planning on getting some incredible vanilla ice cream today so I can put a dollop on top. But it's definitely an eat-from-the-jar kind of thing.
Fig Lemon Fennel Jam
1 pound of dried figs, stems removed
3 cups of water
1 lemon, zest only, in strips
1 tablespoon of fennel seeds
1/3 vanilla bean pod, seeds scraped
Simmer until figs are plumped. About thirty minutes. 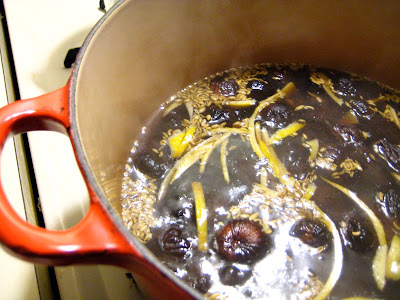 Add:
1 cup of sugar
2 tablespoons of lemon juice
Simmer for another thirty minutes or so until the syrup reaches your desired consistency. If you want, split half the figs with a flat edged utensil. Process for ten minutes. 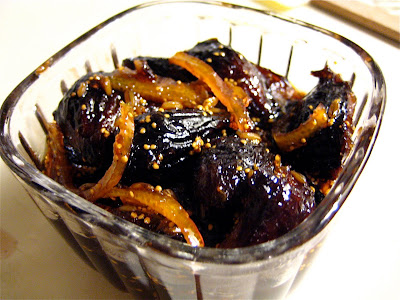 NOTE: The original recipe does not water bath it. It is meant for immediate consumption, and will sit in the fridge for a month. However, I am a wild kind of soul and decided it was okay to can. (I felt it was similar enough to a few recipes that the acid was okay. I also raised the sugar.) However, I only made enough for me and will be the only one consuming it. There was no testing involved. So can this at your own risk. 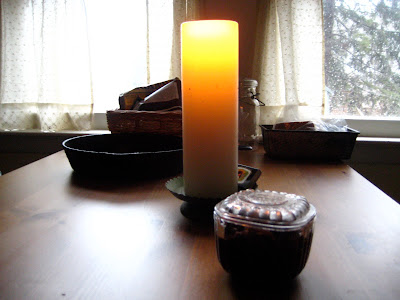 It was miserable outside when I made this and the power went out just as I was finishing up. So I canned by candlelight. Very romantic.
Posted by Julia at 9:47 AM