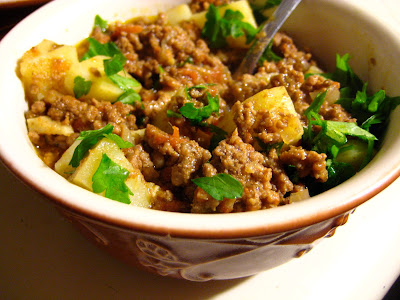 We don't eat a lot of ground beef and to be honest, unless it's a fabulous burger, to me ground beef is a little dull on it's own. But it was all I had, and Shepherd's Pie wasn't doing it for me, so I dug into always trusty Joy of Cooking and found this recipe. It worked, but I really expected it to sing out a little more. I mean the recipe has loads of garlic, cumin, ginger, coriander. But when I tasted it, yeah, it was good, but it needed something. What it needed, folks, was some pickles. Dill lemon cucumbers from last summer, and the turnip-radish pickles I made last week. The pickles elevated a simple meal into a special one wherein there were precious few leftovers. The high notes were reached. It reminded me of Uzbekistan food; not that I've been there. We used to go to this place in Brighton Beach called Chio Pio. It was incredibly good--bottles of vodka on tables, and hearty food piled high, rich meat filled pies and plates of salty pickles. I loved that place.
Saute two diced onions in oil til golden. Add spices:
2t minced garlic
2t grated ginger
2t cumin
2t coriander, ground (I used whole)
1t turmeric
red pepper flakes to taste
Then add a pound or so of ground beef, 1/2 cup of drained chopped tomatoes, some salt. Cook and reduce liquid, about ten minutes. Add three or four potatoes, peeled and cut in small chunks and a cup of water. Cover and simmer on low for twenty minutes or until potatoes are tender. Uncover and cook on high to reduce liquid. Adjust seasoning. Top with chopped parsley or cilantro, or both, and scarf down with pickles. 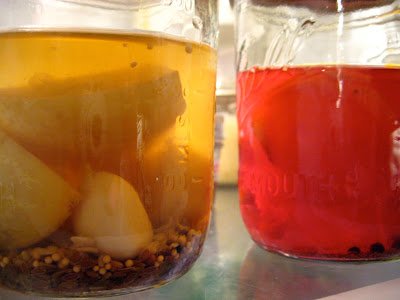 Then tonight we had some pork chops, nothing special, just sauteed with apples and onions, all local. But the side dish was special. Sweet and sour red cabbage. I love that stuff. Reminds me of the special New Year's Day meal my mother used to make, which was German, roast pork with kartoffelklosse (potato dumplings) and red cabbage. For this I sauteed shallots in bacon fat (yes, that bacon fat) and then added the sliced cabbage with some brown sugar, balsamic vinegar, salt, pepper and you know what? I didn't have stock, but I did have some orange herbal tea sitting on the back burner, so I used that instead. It was just fine. I love it when that kind of thing happens. 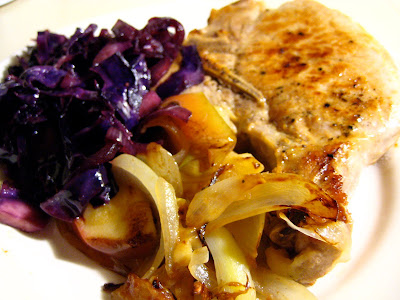 And then I made my desperation cookies. I made this recipe sans the chips to leave in the fridge for when the sugar itch scratches. Which it does often. They were in the fridge and I just baked some off. Studded with marzipan and almonds, they hit the spot. 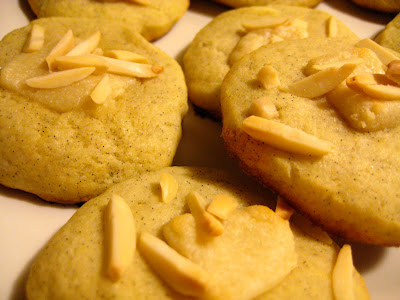