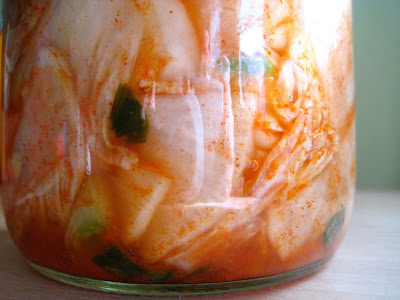 Last week I started some kimchi, which I had been craving. I found a nice head of Chinese (napa) cabbage and a large daikon radish. Both of them were two pounds, so I had to double the recipe I used, which was from The Joy of Pickling by Linda Ziedrich. I love kimchi, but I am embarrassed to admit I'm a bit of a wimp when it comes to tolerating heat in foods. I used half cayenne and half paprika for this (suggested in the book), and it's still a tad hot. But boy is it good! Maybe that's the lure for people who love spicy stuff---the sado-masochistic side of it. Not being able to stop even when it hurts. I stop. I'm such a baby!
This will last in the fridge for a super long time. I'll probably try to foist some on a friend, because I did make 2 1/2 quarts of it. Last night we had potatoes, apples and kielbasa (all local!) and we didn't have sauerkraut, so I served it with the kimchi and the rest of the pickled onions at the bottom of the jar of bread and butter lemon cucumber pickles. What a great wintry meal! 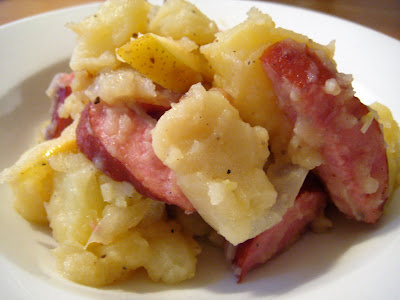 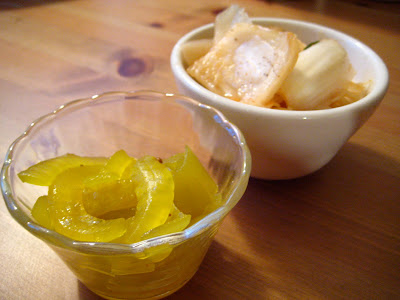 I doubled this recipe, and used paprika and cayenne instead of Korean dried hot pepper.
3 tablespoons pickling salt
5 cups water
1 pound Chinese cabbage, cut into 2 inch squares
1 pound daikon, peeled and sliced
1 1/2 tablespoons minced fresh ginger
5 scallions, sliced
1 1/2 tablespoons of Korean ground dried hot pepper
1 teaspoon sugar
Dissolve 2 T plus 2 t of salt in the water. Reserve 1 teaspoon for later! Combine vegetables in large crock and cover with the brine. Weight the veggies down, and let stand for 12 hours. I used the lining of my crock pot. Works great for pickles.
Drain and reserve brine. Combine vegetables and the rest of the ingredients with the remaining 1 teaspoon of salt. Pack mixture into a 2 quart jar. (I used three quart jars.) Cover with reserved brine, then put a freezer bag in and fill it with more brine to weight down the vegetables. Seal the bag. Let it ferment for 3 to 6 days, at a temperature no higher than 68 degrees (my basement does the trick). When it's done, remove the bag, seal the jar and keep in the fridge. It will keep for months.
N.B. This is brilliant. A recipe for Kimchi pancake: http://www.nytimes.com/2010/01/13/dining/131vrex.html?ref=dining
Posted by Julia at 10:27 AM