What To Do When Your Jams Fail 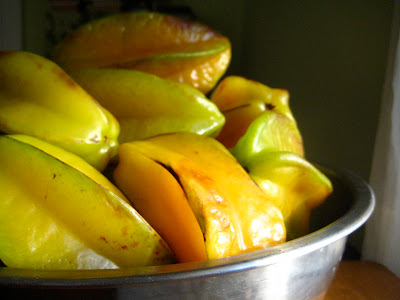 I've been really, really lucky lately. Not only did I get some calamondins sent to me from Florida, but I also got some star fruit. My mother is pretty dang cool. And so is the friend who owns the trees she picked these fruit from! After opening this huge box of star fruit (or carambola), I got right to work preserving them. I froze some, slicing them and freezing them on trays. Star fruit are good for fresh eating, and I'm not completely sold on canning them. I should point out that star fruit are high in oxalic acid, and those with kidney issues might want to abstain. I didn't know that about star fruit!

STOP. That's how this post started last week. To be honest, I wasn't too thrilled with my preserves, so what did I do? Made another batch of star fruit jam. I don't learn. I had heard people raving about star fruit jam. Why just the other day while my son ate a star fruit for snack time in toddler play group, a father gushed about the star fruit jam he had once and how good it was. I must have just made a mistake on the first batch, I thought.

Well, star fruit jam is not as easy as it seems. And if you want my opinion, it doesn't make a good jam on its own. I'm not the only one who says that. The woman whose tree I got mine from concurs. I learned this after I made the two jams. I did find, however, that they are good mixed with something else. I made a key lime-star fruit-calamondin marmalade, and it came out quite nicely. I think star fruit need to be with other fruit. Like pineapple. Wendy Read of Sunchowder's Emporia gave me a starfruit recipe that paired the carambola with pineapple. Did I use it? No. Though I bet pineapple would be perfect! Anything with high acidity and punch would be nice. How about Flamingo Musings' Carambola Pepper Jam? (Which I didn't make.) Something spicy might be just the kick that star fruit need. Sigh.


So. I made two jams. One is preserved star fruit with orange peel pectin. The other is a light jam that I used Pomona's Pectin in, and lowered the sugar thinking it would let the subtle taste of the star fruit shine. Nope. And neither jam set. The reason why I posting this is not to complain (well, maybe a little), but to point out that once you have made a jam that you are not happy with, there are a few things you can do to avoid chucking the lot. I do admit though, there are times when tossing it seems the only route. One time I saw a chef's batch of nectarine jam that had turned to candy. Hard as a rock. That might need to be tossed.

1. Let it sit and try it in a month or two. I just tasted a peach ginger preserve that I thought was boring, and upon tasting it I found I was dead wrong. It's delicious. Was I bored of peaches at the time? Did it need to sit? Who knows. But I'm glad I didn't give it all away.

2. Cook with it. I'm always adding a half-pint of jam to one baked good or another. Obvious choices are muffins and quick breads and smoothies. Make sure to reduce the sugar in the recipe. Or the obvious savory applications, like roasted or grilled meats, salad dressings and the like. Sometimes dull or bland preserves are the perfect thing for cooking applications.

3. Re-cook it. Yes, open those jars and add it to some more fruit and make a new jam. Obviously, this is for someone who's comfortable creating their own jams. But keep this in mind: you can can foods that have already been canned. Capisce? I opened four jars and made a Meyer lemon star fruit jam. I think it tastes great, but still the set isn't perfect. That is no problem at all because now it actually tastes good. I might use the rest for a chutney. And I don't have to turn these around right away. I can wait a little bit. Star fruit rhubarb jam perhaps?

4. Give it away to someone who might like it. I wouldn't do this with these star fruit jams, because they just weren't right. It tasted like I made cucumber jam. Bleh. But sometimes it's just a personal issue. And if you give it away, then it's their problem! Ha, just kidding. I recently received a lovely jar of banana jam, and I couldn't get past the smell. I have a thing with cooked bananas. I think it's psychological. But put in a batch of buttermilk muffins, and then I'm eating way too many.

What do you do when your jams fail? Besides curse, of course.