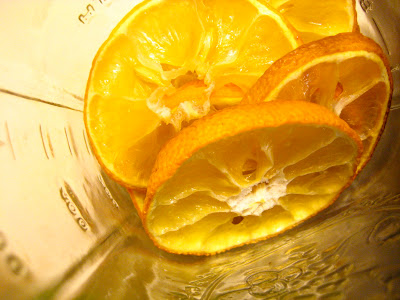 The world of orange-flavored liqueurs is a big one. Let's get a few things straight at the start. Triple Sec is orange liqueur usually made from dried bitter and sweet orange peels and grain alcohol. There are many different brands of triple sec, like Cointreau and Grand Marnier. Cointreau is apparently brandy-based, though a trip to their purple-prosed site reveals nothing but very funny copy.  Grand Marnier is a cognac-based orange liqueur. I'm sure I've had my fair share of "well" orange liqueurs, like De Kuypers and Marie Brizard, but I think I've stayed clear of Curaçao, that crazy blue stuff.

A while back I was sent some sour oranges from my mother in Florida and being fairly marmaladed out, I decided to make some booze. I had brandy in the house so I decided to go with it. I guess this is a Cointreau-style triple sec? There were a few recipes I sifted through, but what I was most intrigued by was a technique to bake orange slices at a low temperature first and then to soak the slices.

Arrange the slices on a cookie tray lined with parchment paper in a single layer. Bake them for two hours and then leave them in the warm oven. Doing this step at night works well--leave them overnight in the oven. Place citrus slices in a quart jar, cover with brandy and let sit for four weeks. Then strain the fruit, leaving the brandy in the jar. Add one cup of sugar and let sit for two more weeks, inverting jar daily until sugar is dissolved.

Note: I froze my brandy soaked citrus, thinking it might be a lovely addition to a marmalade whenever I get the impetus to make marmalade again.

I didn't add a simple syrup to the brandy because I wanted to really taste the oranges. As I'm writing this, I'm sipping a small glass. It's not as sweet as triple sec (though I must admit, I haven't had a straight slug of triple sec since I was what, 13?), and the taste of oranges first, followed by a bitter tang afterwards is very pleasurable. I now know why this was at one time a digestif, or aperitif.

Check out these other recipes:
Mrs. Wheelbarrow's version with Cara Cara oranges and vodka
An interesting version from Thursday Happy Hour that "tastes like orange hard candy"
and one from Food, Literature, Philosophy