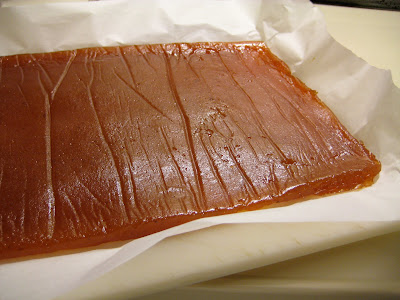 I finally did it! The last five pounds of quince have been utilized, and I fulfilled my latest obsession of quince paste. I have made quince jelly already, but for some reason membrillo had me a little wary. Every recipe I read had warnings of long periods of time stirring bubbly goo. But I so desired it. How can you not get obsessed over quince fruit, when every time you read about it the author is prompted to go into detail of its illustrious history, its connection to Nostradamus, its heavenly perfume, its ancient mystery. Don't look at me for one of these of well-researched and beautifully written treatises, because you will certainly not find it. But I can direct you to Kevin West's Saving the Seasons (Parts I, II and III) because not only did I mostly follow his recipe for membrillo, but he really lays down the quince law. What I think is most beautiful about his recipe is that he bakes it in the oven at a low temperature, thus taking the fuss work out of it. I let it sit in the oven over the course of a day, forgetting about it, not caring for it, and it came out beautifully.
4 cups of quince puree (from five pounds of quince simmered for an hour, juice reserved for future jelly)
4 cups of sugar
2 tbsp of lemon juice
I chose not to use any aromatics or spices, because I wanted to taste it on its own, but I know next time I will use any of the great recipes I saw, like a plain vanilla bean, or cinnamon and nutmeg, or a more savory style with bay leaves and thyme. They all sound great.
After blending the ingredients in a pot on the stove top until all the sugar dissolved, I poured that mixture into a 13 x 9 pan that was oiled, covered in parchment paper, which was then oiled. (I wasn't taking any chances.) I realized a few hours in that moving to a larger, shallower pan would help, so I did just that. After about five hours (at 225 degrees) I turned off the oven and let it sit over night. The next day I flipped the whole thing (carefully!) and let it sit for another day. This morning I divvied the business up. My bars of membrillo aren't quite as brick-like as many I've seen, both in size and hue, but they are nice little candy bars, and that's just fine for me. 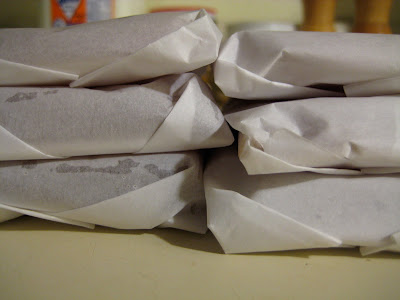 I'm also obsessed with jelly candies, and on reading a book review of a local history of the Dutch settlers gustatory habits, I was piqued by quince squares, a sweet treat back in the early 1700s. I got the book out, but no recipe there! So I just cut up half of the quince paste and dipped them in sugar. I'm sure it's the same exact thing. Aren't they pretty? 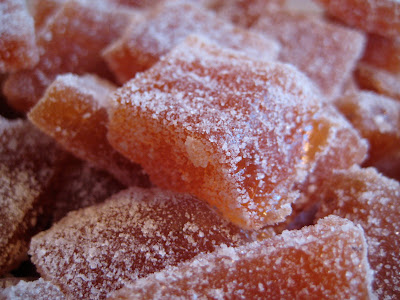 Later on we'll have some membrillo with cheese and bread. Isn't it a great little loaf? I love that Artisan Bread in Five Minutes a Day. It's really great to have on hand. Especially when you live in the land of not so good bread. I keep the larger portion in the fridge, which they say makes eight loaves, but no so for this bread eater. I'd say it's more like four loaves.
N.B. You might also want to check out Put Up or Shut Up's Quince Paste using the microwave. Joy of Cooking also has a version of that. Cuts the time up, if you don't have it. 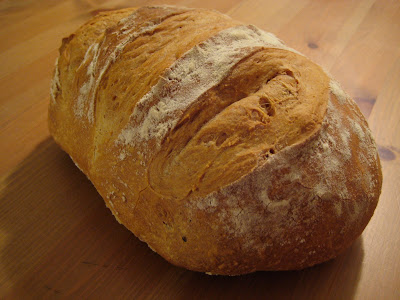