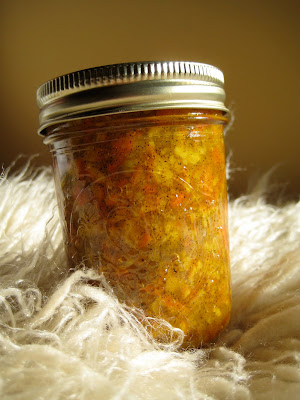 I couldn't resist making the microwaved tangerine marmalade recipe from Put Up or Shut Up. I have bowls of citrus everywhere in the house because I love how it looks this time of year. But also because I have plans for each and every one of them. The few tangerines I had around were destined for this small batch recipe. I can't believe that this took all of twenty minutes to make. I'm a believer.

Some of the things I chose to do with this recipe:

I didn't process them, deciding instead to keep them in the fridge.

I didn't peel the tangerines, just sliced off the ends, halved them to remove the pits, and quartered them to prep for the food processor.

I used vanilla instead of rum and nutmeg. But this recipe is so easy you could make it every week and continuously change the flavorings.
My yield was 1 1/2 pints.

After the second cooking with the saran wrap removed, I decided to put the mixture in for a few more minutes as suggested. However, I did it for five minutes, leaving me with a very thick jam. More candied fruit than jelly. Which is totally fine but next time I would probably do just a minute or two and not five. Just like she suggests. I just didn't listen.
I would bet this would work with any citrus. It was really such a treat to make this as the baby napped, while still leaving time for cleaning and writing, too. And it's really a ray of sunshine during these spectacularly cold and dismal days of winter. 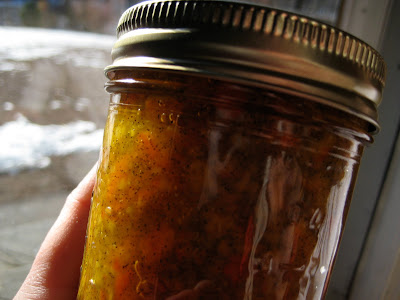