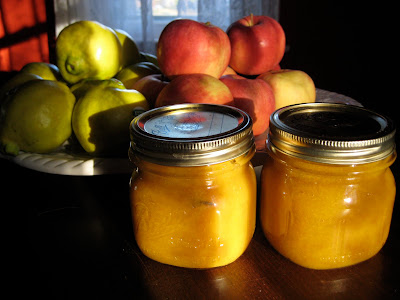 This isn't a picture of the jelly, but rather a picture of it's by product, artfully named jelly bag butter. I think I prefer the title apple-apricot sauce, but that's just me. I got savvy to this when making my quince jelly. That the pulp left over from jelly making can be put through a food mill rather easily and ecco, you have another two jars of loveliness. I used my apple plum star anise recipe as a guideline, subbing apricots for plums.
The numbers looked like this:
2 1/4 pounds apples
2 1/4 pounds apricots
8 1/2 cups water
The apples were Ida Reds, and they were quartered. Apricots were halved and pitted. Simmered for thirty minutes. Juice strained from the fruit mush. I let the juice sit in the fridge overnight whilst it strained a second time.
Meanwhile, I put the fruit through a food mill. The puree measured about five cups; I added one cup of sugar and a few cloves, and let that all simmer a while. Tart and tangy. Mmm. I didn't process it, but instead put it in the fridge. Not only will it be good just spooned right out, but also in some recipes I've got swimming in my head.
The next day, I measured out 4 1/4 cups of the juice and still had 4 1/4 to freeze for future jelly. I love that. In a pot with 4 cups of sugar, and 2 tbsp of lemon juice, it simmered until almost jelling, when I added one tablespoon of apricot brandy and one teaspoon of almond extract. I was looking for that marzipan scent. Reached the jelling point and canned it. The end.
I didn't take a picture of the jelly because who needs another picture of gorgeous golden jelly all nice and pretty in a jar? Besides, it's rainy and I have several things on the stove to tend to, oh, and I hear someone waking up from their nap!
N.B.: All my jelly recipes are written pretty loosely, mostly for my own documenting purposes. If you have any questions, by all means leave a comment or e-mail me. Jelly is dangerous. Make your jelly responsibly.