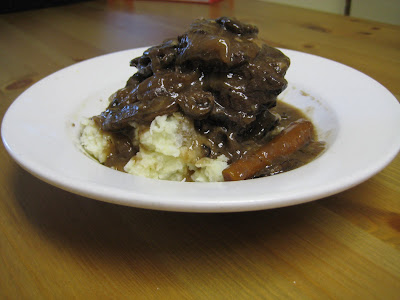 Let me start off by saying that photographing food is extremely hard, and this photo illustrates that sentiment. Especially meat with some dark gravy. It just looks awful. Meat must be the hardest thing to photograph. Have you ever seen those new-ish meat print ads that say something like, "Welcome to the Land of Beef," and it's a landscape, a diorama, if you will, made of a large cut of beef with gravy as the sea around it. It's disgusting. That said, this meal was very far from disgusting. The first braised meat of the season the day before autumn was officially here. It's a welcome taste.
Braised meat is incredibly easy as long as you have the time to let it do its business in the oven. All I did was brown the meat in a sturdy dutch oven, then removed it to make room for sauteing red onions, then carrots. Then two cups of red wine to deglaze. Slowly added two cups chicken stock. Returned the ribs to the mix, arranging them just so, covered the whole shebang and stuck it in a 325 degree oven for 2-3 hours. Voila, you are done. I mashed potatoes with skin on, some butter and yogurt, salt and pepper.
Welcome, to the land of beef!
Posted by Julia at 8:05 AM