Quince Slices in Light Syrup with Cardamom and Clementine 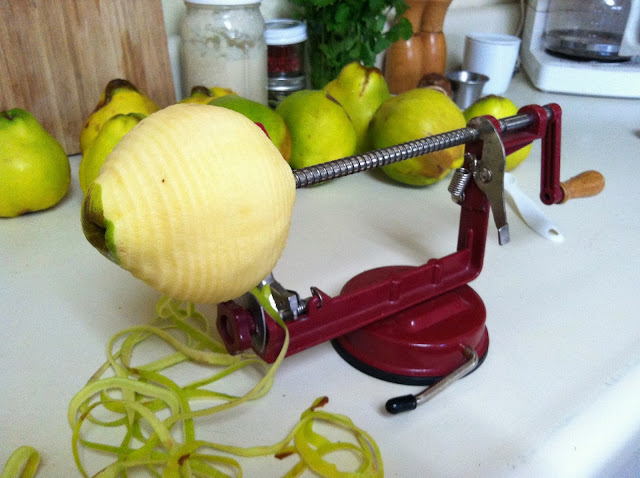 Let the quincing begin! Today I worked with 7 pounds of quinces, slicing them down into twelfths in order to can them in a light syrup. I do believe quinces, though heavenly, are a difficult fruit. They do not yield, and they're tough as a winter squash sometimes. After I peeled them all--with an apple peeler that worked quite nicely, see above--I cored and sliced them all. My hands were trembling with exhaustion afterwards. I'm usually not that delicate, but my arms were a little tired from chopping some wood the other day. Now there's some really tough work.

First I poached them in a gallon of water with a tablespoon of lemon juice, letting them simmer lightly with the lid on. When they were just tender I let them sit while I readied the water boiler and brought the syrup to a simmer. Into the syrup went the zest and juice of two clementines and about twenty cardamom pods, half of them whole and half opened so the little seeds swam could swim about. When the syrup was at a good simmer, I skimmed the slices of quince from the water bath and dropped them in. When they were all in, I let them simmer for about 5-10 minutes. Into pint jars they went, to be processed for twenty minutes.
Posted by Julia at 6:52 PM