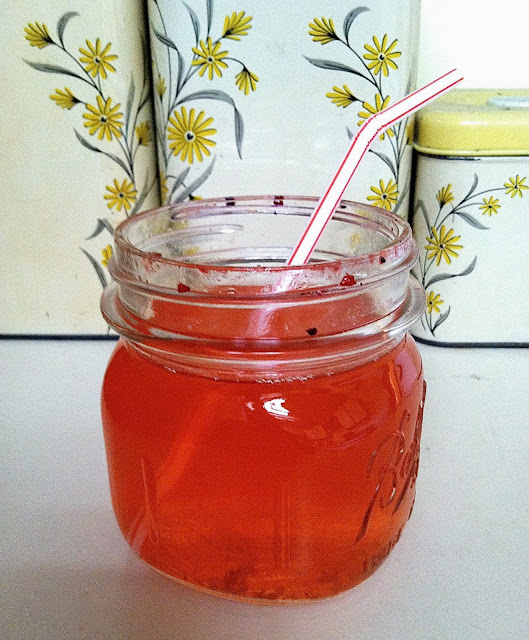 Oh, goodness. I've been sick three times already this fall! They were all more of the fighting off kinds of sickness, not full blown luckily, but still, I've been battling and it takes the energy out of you. Is it kindergarten? Is my child bringing me home all sorts of strains of viruses? The last few days I've been battling a bit of a stomach bug. I don't want to talk about food just yet, you know? I'm trying to hydrate. I haven't wanted anything sweet, so now that I'm feeling better I'm sort of craving it. A little toast with jam hit the spot. The last of the raspberry jam, which is my favorite. After I scraped the jar almost clean, I stashed the jar on the side of the sink, because as we all know, a little water or seltzer in the end of a jam jar not only cleans the jar, but affords a frugal and refreshing drink. And you don't have to waste a spot of those precious raspberries that you hand picked in September. My only problem with jam-water (what is it called, anyway?) is that it needs a little brightening. A splash of apple cider vinegar does the drink and boom you have instant shrub. Instant shrub is going to get you, you know.

One of my favorite drinks in the fall is apple cider, a splash of apple cider vinegar topped with seltzer. When I was in Seattle last year, I was lucky enough to be taken to Bar Sajor and they had so many drinking vinegars! It's a big west coast thing. Did I have a rhubarb? I can't recall because there was so much good food eaten, but take a look at their lunch menu, it's all amazing stuff. I don't think I've seen any shrubs up in these parts, but I'm sure Brooklyn is all over it. Do you like shrubs? Or a vinegary drink? I love them!
Posted by Julia at 12:47 PM