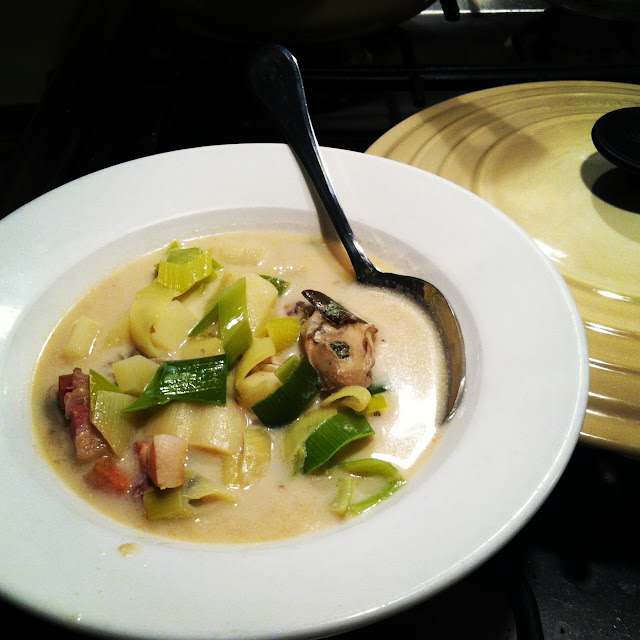 Last night we had oyster chowder for dinner. Steve bought two pints of shucked oysters the other day which I thought was overkill, knowing just how many oysters are hiding in there, swimming around in their liquor, but we benefited nonetheless. How can you have too many oysters? Well, at one point the world did have too many beautiful oysters, but that's a different depressing story about how we ate them all and ruined their habitat. But we won't go there right now. Right now, we are celebrating this simple and warming soup.

I used this recipe from Epicurious as a guideline, but didn't really follow it. It's such a simple soup! I had nice home made bacon at the ready: swoon! And beautiful sturdy leeks. A bag of shrimp shells in the freezer made a quick broth to sub for clam juice, and a much better one if you ask me. And I used milk instead of cream, and omitted the flour. A completely different recipe!

Oysters are such a symbol of the new year. Here are some other recent posts on the beautiful bivalve:

Check out Michael's Oyster Stew
and check out Laura's post on oysters and the new year.
Posted by Julia at 9:05 AM