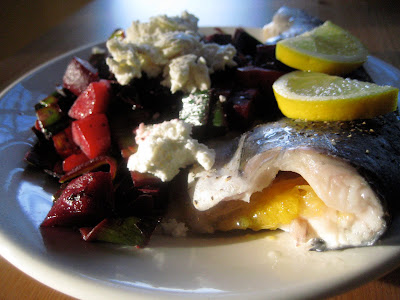 Last night's dinner was outrageously good. Was it because it was warm and sunny? Was it because we had dinner on the porch along with a bottle of rosé? Perhaps, rabbit, perhaps. I still think it was one of the better meals we've had in a while, and I'm sure it also has to do with the taste of meals to come. That is, it was a spring time meal. We had trout that I stuffed with the foamy leavings from my tangelo lemongrass jelly. I saved the lemongrass and foam because it looked too good to throw out. Good idea, says I, because stuffed in this trout was an inspired move. (And I cleared a jar out of the fridge!) I was waiting for some nice duck for that jelly foam, but haven't seen any. Did you ever think to stuff your fish with jelly? No? Think again! I baked the whole fish, stuffed and drizzled with olive oil, salt and pepper, for about twenty minutes at 400 degrees. 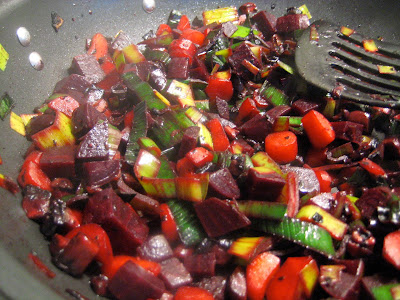 This here is what I'm talking about. Early springtime hash. Carrots, beets, leeks and portobello mushrooms, diced, sauteed in olive oil, salt, pepper, and drizzled with shallot confiture syrup. Can I say boo-ya? I hate saying that, but I really think it deserves it. 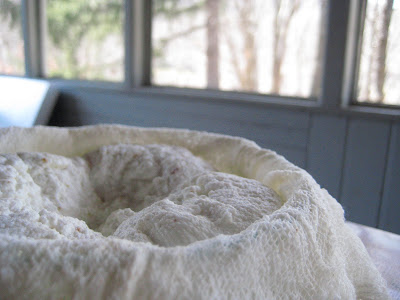 And, oh, what's this? Some fresh ricotta that I made and crumbled on top of the hash? You should make some of this cheese. I can't believe it took me this long in life to figure this out. Easiest cheese ever. (Except for maybe yogurt cheese.) I used this recipe from 101 Cookbooks, although it's pretty much standard stuff. And don't forget to save your whey. Yah, whey! You can bake with it, drink it (if you want, maybe I don't want to), use it in a soup. It's going to rain this weekend, so bread and soup it is. 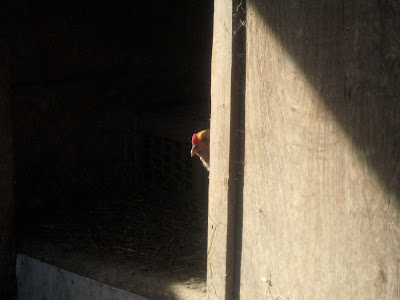 And who is this? 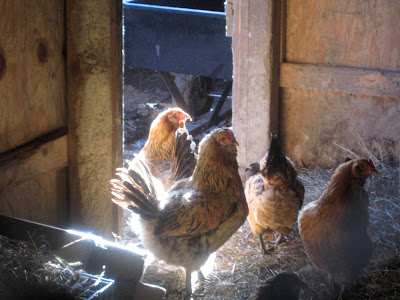 Meet my girls! I didn't think I would get so attached to them so quickly! They are Ameraucanas, and I couldn't be happier with them. They lay delicious blue and brown eggs. 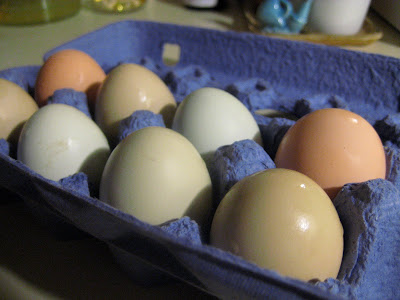 More on them soon. I've only had them a week so we're still getting to know one another, but I've been bribing them with scraps from the house and they are buying it. This weekend is all about outdoors and celebrating spring. I couldn't be more thrilled.
Happy Vernal Equinox, everyone!
Posted by Julia at 1:26 PM