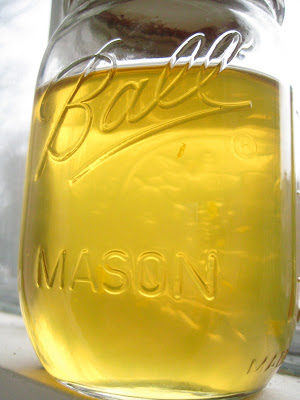 Disclaimer: This was a big fat fail. To be fair, the original recipe said they would be soft. Code for falling apart? My flapjacks were delicious, though very sweet, but fell apart like so much oatmeal covered in sugar. Was it my substitution of old-fashioned oats? The clementine syrup? (I can't imagine.) Or should I have baked it longer? Let it cool longer? Ah, the mysteries of life. All is not lost, however, I will gladly bake them into another incarnation and eat them eventually. I think they will make a lovely topping for a plum crisp I've got rolling around in my head...But still, I feel so obviously off-kilter. I'll have to slog through a bit of this, I think. So: my apologies.
While I was sick, I received a wonderful package in the mail from Shae. She sent me clementine confits (!) that she had made and as an extra bonus a jar of clementine syrup, a byproduct of the confits. She asked me to think up ways to use it. Well, first off a goodly amount went into my many cups of tea a day. That was a no-brainer. I had a few ideas for her, we'll see if they come to fruition on her blog. In the meantime, I happened across this recipe in Bon Appetit from Molly Wizenberg for British Flapjacks. The recipe is not for pancakes but a sweet oat bar that goes by the name of flapjacks in the UK. It is an incredibly easy recipe, and Wizenberg likens the recipe to rice krispie treats. It also calls for golden syrup, a British product. I thought, well, that clementine syrup looks just like golden syrup. Don't you agree? Who doesn't want a crispy little oat bar with loads of butter and gorgeous clementine syrup in it, and takes all of ten minutes to make (minus baking time)?
1 stick of butter, sliced into eight pieces
1/2 cup golden brown sugar
1/4 cup golden syrup or clementine syrup
2 1/3 cups of oats (recipe calls for quick oats, not instant and not old-fashioned. I used old-fashioned but pulsed them in the processor a few times)
pinch o'salt
Preheat oven to 350 degrees. Butter a square 8x8 pan. Melt butter with sugar and syrup until all is dissolved and looks gorgeously buttery and saucy. Pour the oats in with a pinch of salt. Mix it all up and toss in the pan, patting down neatly. In the oven for 25 minutes, or until golden brown. The edges will be a little darker, as these things tend to go. Let cool in pan for a bit. Don't be hasty! Cut it up into cute little triangles. (Which I forgot to do and made boring little squares.) Let cool completely. (They'll fall apart if you don't let them fully cool. Take it from an impatient baker.) Pour a cuppa tea and enjoy. 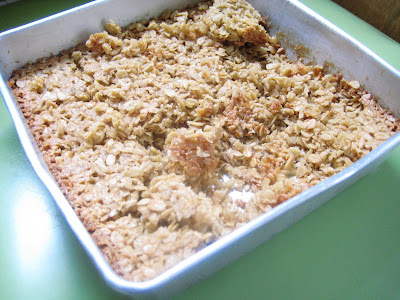