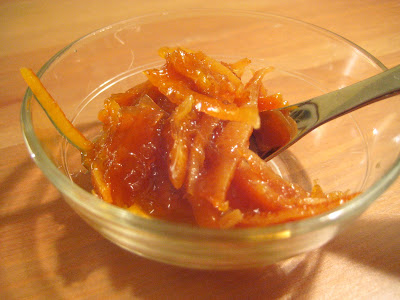 Well, we all have our problems, don't we? Mine is marmalades. Can't get them out of my kitchen. I guess I've had worse problems in prior days. Making preserves is keeping me off the streets. Keeping me honest. Keeping me real.
Okay, so enough of that. I have been doing micro batches, and it's been so much fun. Check it:
I had four cups of peels and pulp that I brought to a boil with two tablespoonfuls of lemon juice and then let cool overnight in the fridge. The next afternoon I measured two cups and added 2/3 of a cup of sugar per cup of orange. Then I added 8 ounces of chopped, very soft dried mission figs. The resulting marmalade is gooey and rich, the figs add a smooth texture and a mellow to the peel's bitterness. This made three pints.
The next day, I used the balance of the oranges with the same 2/3 cup sugar per cup ratio, but as it reached the jel stage I poured in eight ounces of very concentrated Earl Grey tea (four bags, opened). It took forever to get it back to the jelling point, and I still think it's closer to a syrupy consistency. But how inspired is marmalade with tea in it? And Earl Grey, no less. I mean, really. To be sure, it's not my invention, I lifted the idea from Christine Ferber.
I have to admit this is a rushed post with uninspired photos. Today was a gorgeous day and I spent the good part of it out of doors, chopping up the many downed branches from our latest spate of storms. I dug among the beds, pulling back the warm blanket of leaves to see so many shoots coming up, some of which perplexed me: what did I plant here? I also sprinkled some buckwheat seed in one of the beds just because I wanted to plant something. I tidied the shed. I pruned all of the ornamental grasses. I played in the thick mud by the barn, daydreaming about the chickens I plan to get next week. I did a lot of dreaming, actually, listening to the stream gurgle by, watching the ice melt on the pond, wondering where I could squeeze in all the squash I want to grow. Lots of planes growled by, hawks swirled soundlessly on thermals. How am I ever going to find time to write once this season is in full swing? 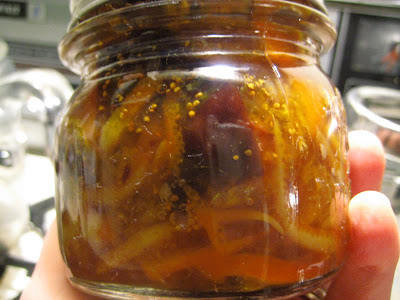