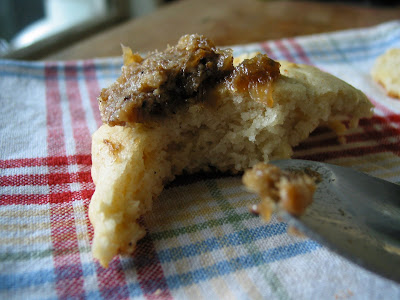 There's been a lot of posts on charcuterie alternated with fruity preserve-y stuff, and so I figured I'd combine the two!

No, not really, but this is a meat "jam." I had some guanciale sitting around and had this idea for a spreadable meat, like 'nduja. Or, probably closer in style to bacon marmalade. Last year bacon marmalade was everywhere--do a search and a bunch of things come up. I sort of used those recipes as a guideline, and I wish I hadn't because the flavoring for guanciale should have been more subtle than for bacon. If I ever do it again, I would use white wine vinegar and fresh herbs, maybe honey.

I diced my small stash of cured jowl and sauteed it until brown and crispy. Poured off the excess fat to use later. Placed the meat to the side. Put one chopped onion in the hot pan that was still lightly greased, and cooked until soft and browned. I added some brown sugar and cider vinegar. I cooked it all down for a while, added water when it got dry. When it looked right to me, which was about twenty minutes, I took it off the heat and let it cool. When cool, into the processor it went to be whizzed down into a smooth-ish paste.

This little jar of gold has been coming in handy with the huge amount of kales and chard I have. A spoonful in a hot cast iron pan is the perfect accompaniment to hearty greens. I also had some Charcutepalooza Canadian bacon on hand, a small chunk, and chopped that into the pan as well. Add a little whey, if you have it, to simmer it all down....

It's also good on biscuits. These were made with lard (that I got from the generous Lisa Mack of Mack Hill Farms) with buttermilk and sourdough starter. It was slightly decadent to say the least! That was a really fine breakfast. 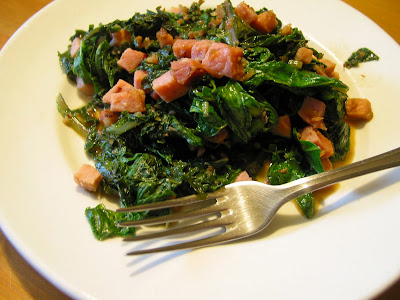