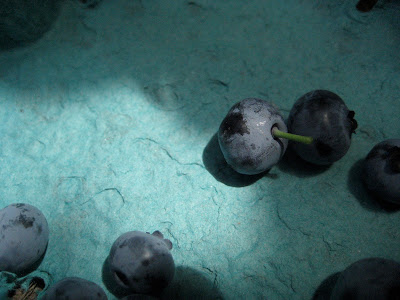 At some point, maybe it's the end of June, summer just hits you like a ton of bricks. Nothing is happening, and the crickets are chirping, and then it happens: fruit starts piling up in your fridge and then you get invited to everything in the world. I am not complaining here, actually, praise be for summer! With its ten pounds of blueberries, and six more weeks in the season. And its 25 pound boxes of apricots from around the corner. Its long drives past corn fields that start to scent the air with a sweet tea smell of new corn. And its cocktails, laughter, kids plastered with sand and ice pop residue.

It's not without it's normal downsides, the inevitable complexities of living. There's the car that died, and the one that's close behind it. There's the cell phone that died. There's a chicken that's not roosting, making you constantly wonder what could be wrong. And there's a meat grinder you bought that is a piece of junk (more on that later). And if you're a gardener, there are the myriad questions that pop up every day: is that leaf roll? Is that blight? Why are her cucumbers ready and mine are only a centimeter?? Endless inequities pile up, as usual, but something about summertime renders them less painful than during the winter. The blue skies stretched with cottony clouds are a palliative for mostly anything that life can throw my way. (I stress the mostly, as I knock on wood.)


And then there's jam. My routine lately is to make jam at night after my son had gone to sleep, and it's become a nice quiet meditative exercise that prepares me for bed almost as well as yoga. The other day, the confluence of apricots and blueberries in my house encouraged this jam to be. It's truly tart and sweet at the same time, and turned a gorgeous purple magenta color. 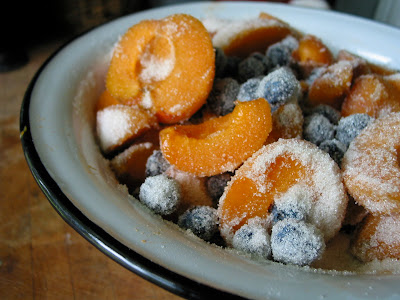 3 pounds of apricots
1 pound of blueberries
2 pounds of sugar
Mix fruit and sugar and let macerate overnight in a glass bowl, or for however long you can stand waiting.
Put the mixture into your jam pot. Add 1 tablespoon of lemon juice. I put in a sack of the apricot pits, for the almond flavor they impart. I don't crack them to release the kernel, like many folks do. I put them in whole because I am lazy. This step is up to you!
Bring everything to a boil and watch for it to foam furiously. Because of the pectin content of the blueberries, this came to the gel stage rather quickly, about fifteen minutes of bubbling ferocity. When it was done, I turned off the heat to let the bubbles subside and added a quarter cup of almond liqueur. You don't have to add anything, and you could use something else that you have on hand. Or pop in some fresh herbs from the garden. I almost put in a dessert wine but went with the almond riff. It's barely detectable, but I do think it smoothed out the tartness. Remove the bag of pits, if you included them.
Ladle into hot jars, seal, and process for ten minutes in a boiling water bath. 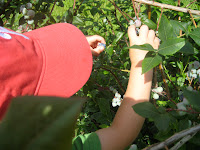 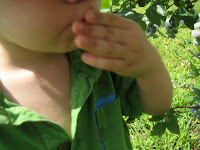