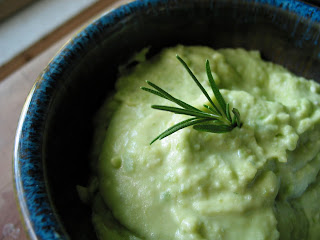 Or you could call this a fava bean hummus, as my friend Pete did. Some friends I hadn't seen for a while stopped by the other night, and luckily I had a little bit of this on hand to offer up. I had almost eaten the whole thing for dinner it was so good. But I reigned myself in, even though it was creamy and fresh tasting and an irresistible color. Later on, we were all sitting at our outdoor table, the sun was going down in a magenta blur behind the trees, and the baby was asleep. Perfect timing for a few beers and a light snack with some old friends.

We had all lived together back in the New Paltz college years. It was a very communal time, in which an old house up on a hill on Springtown Road was one of the backdrops for lots of time frittering. Ah, those sweet days of wasting your college education! Long hikes in the mountains and late nights in town. People hanging around playing guitars. Maybe some occasional studying, but a good deal of reading. I lived in a shack (that's what we called it) that had no plumbing. I thought it was a good deal, and it would be very poetic and rustic at the same time. I might have had a little "beat generation" thing going on back then. Thankfully, my friends' house was right next door, and they availed me the use of their bourgeoise indoor plumbing.

Now, we all have families, and jobs, and houses to take care of. And now, we're eating things like fava bean dip and drinking Lagunitas beer. But it was a good life then, actually, as it's a good one now. I think someone might have had a can of Rolling Rock, though, just to keep it real.

1. Round up one pound of fresh fava beans. Remove the beans from their soft, cozy pod. I always think I want to curl up in there. No wonder favas are so velvety. They sleep well.

3. Drain and when cooled a little, slip their heavy jackets off to reveal the stunningly emerald beans inside.

4. Put all your beans into a food processor and start it up, while pouring olive oil  slowly in. Add the juice of a medium lemon. Some salt and pepper. Then add stalk of sticky rosemary, needles pulled off the stem and one or two cloves of garlic.

5. No measurements. Make sure it looks dippy, and thick. Taste it to see if it needs anything. Put it in a bowl, serve with pita chopped into eighths. Enjoy with some old pals. 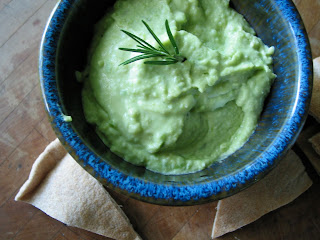