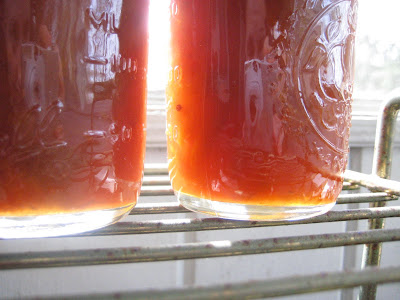 Before full-on pantry raiding happens, the big freezer clean-out must occur. That is to say, that all the goodies in the freezer have to be canned or eaten. Particularly before a shipment of forty pounds of local chicken meat comes to roost. I'm a bit of a hoarder, so I still had two big bags of apricots and plums from last fall. Instead of doing small batches, I took them out in one fell swoop by combining the two. I feel that apricots and plums go incredibly well together. And because I had a jar of orange pectin in the freezer too, I figured I'd make the jam with that.
Apricots don't have much by way of pectin, but they have a nice level of acidity. Plums vary on pectin, and I've read a lot of varying reports on that. I think it's safe to say that if you have a sweet plum, say the black ones, you don't have a lot of pectin. I was working with a tart but sweet Santa Rosa, which are just a gorgeous pinky-peach color. I didn't want the orange pectin to overpower the flavor of the fruit, so I used much less than the ratio of the jelly I made with orange pectin, hence, it wasn't as firm.
This jam took forever to jell. It was sheeting like mad, however, not quite at the wrinkle stage, but I pulled it because it seemed to be overcooking and the flavor was changing from that fresh fruit stage to a more sugared fruit stage. After sitting, it still is a soft set but holds together nicely on toast. It's a real soft spread, as they say. It's a gorgeous carnelian color, and although sweet--even though the sugar ratio is quite low--it retained its punchy acidity, thanks to the fruit.
I thought about these measurements for a while and I'm still not entirely sure of them. I didn't add lemon juice, because the pectin has a bunch in it. I think if you are looking for a firmer set, you might want to have equal amounts pectin to fruit, so I should have had eight cups. That would have been too much for my pot. Next time I might make a much smaller batch.
4 cups plums, halved and drupe removed
4 cups apricots, halved and, or you can say, pits removed
4 cups of sugar
2 cups of orange pectin
Bring all to a boil. How long it will take? Who knows. I pulled this at about 219 degrees? I leave that up to you, mon frere. Process in hot jars for ten minutes. 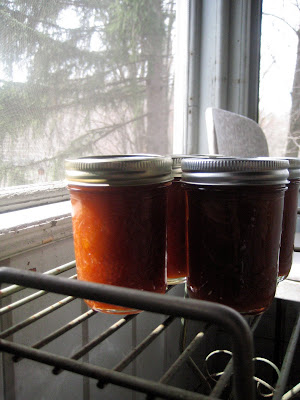