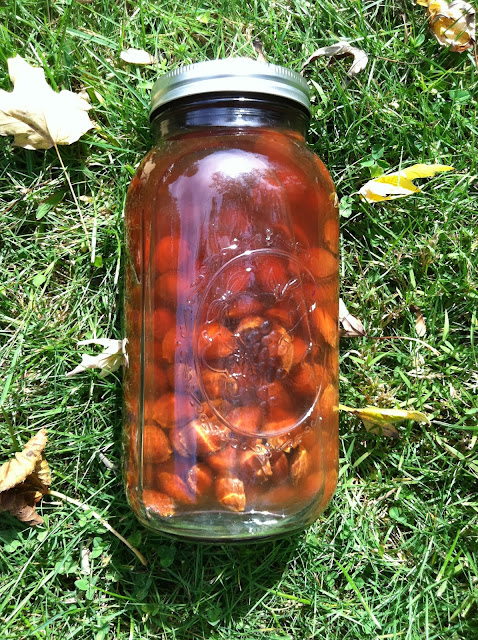 Yep. You saw that title right. Remember when I made this citrus cleaner? Well, this summer when I was up to my elbows in apricots, and their pits, I considered making that pit liqueur, Noyaux. As you might know, apricot pits (and cherries) are related to almonds, and impart an almond flavor when steeped. But, do you know how many little jars of strange liqueurs I have? And, you know, they just sit there. Because for the most part, I'd rather have a glass of wine at the end of the day than fussing with a cocktail, truth be told. But all those pits! What to do with them? I don't throw anything out unless I know I can't do anything with them.

So, I did what any crazy preserver would do: I filled a half-gallon jar with the pits and covered them with white vinegar. I stuck it in the basement and forgot all about it. Almost three months later I've given them a sniff and have declared them a success. Now along with my sour orange cleaner, I also have the option of an exquisitely almond-scented cleaner. The vinegar is a subtle secondary tang to the primary almond scent. And I love that smell!

I guess I could dress a winter salad with it as well---maybe a wilted greens salad with toasted nuts and some figs?

P.S. Do you know how hard it is to make a jar filled with pits and brown liquid look pretty?
P.P.S. As EL notes in the comments below, there is some controversy whether apricot pits are good or bad for you. Click over to the link for the liqueur above for more information on that topic.
Posted by Julia at 12:34 PM