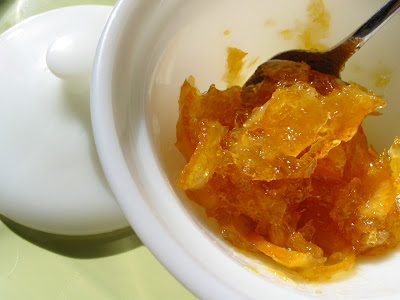 Well, I did it. I finally made some marmalade. You see, last year I went a little overboard with the citrus, and I still have it hanging around even though I try determinedly to use it up. So, this year I disallowed myself shipments of expensive fruit, and instead enjoyed some calamondins sent to me from my mother. She also sent me some Florida sour oranges, which I haven't gotten around to using yet. But the other day I saw a pretty bag of organic navel oranges at the store and my compulsions got the better of me. That four pounds of fruit yielded almost a case of marmalade, and that's plenty for my household, including gift giving.

This recipe is pretty easy, even though it takes three days. I'm not going to say I'm a marmalade expert; go visit Hitchhiking to Heaven for that. This is a homey kind of marmalade. I always used to be scared of doing two batches at once, but it's really very easy. What's nicest about it is that you can have two different flavors. I had been eyeing this King's Ginger liqueur for a while for a marmalade, and who isn't a sucker for a creamsicle?

The oranges should be in the fridge, maybe overnight, so that when you work with them they are chilled. I use my food processor for slicing the oranges.  Although many may scorn my callous handling of the mighty orange, it's a technique not to be overlooked. I do believe hand cutting is superior, but the food processor takes no time at all, and is uniformly thin. In the case of navels, or clementines, which generally don't have seeds, it's quite helpful. With seedy fruit, you can halve them, remove the seeds, and then slice. I like to cut off the ends, quarter the fruit vertically, and neatly process them "standing up" so that the orange slices are (for the most part) perfect pie shapes.

Put the slices in a large ceramic bowl, and cover with water. I used 7 cups of water. You want to fruit to be comfortable to swim around. I used a bit less than normal, because I like a firmer marmalade. Let the mixture sit over night, not refrigerated, with a piece of wax paper over it.

The next day, put the oranges and water in your jam pot, bring to a simmer until the peel is soft. Mine took no time at all. Put it back in the bowl (or leave it in the pot if you prefer) and cover, leaving again until the next day.


Divide the mixture into two different batches. Don't make it one batch, you'll be bummed because it'll take forever. Really, it's not recommended. Mine yielded two batches of orange slices and water that were six cups each.

Add 4 cups of sugar to each batch. For my two batches this is what I added:


2 tablespoons of lemon juice
1 teaspoon of peeled, grated ginger
1/4 cup of The King's Ginger Liqueur (not to be added until the very end)

Bring each mixture to a boil and let it cook for about 30 to 40 minutes, which depends on everything from the weather, your preferred brand of sugar or to the pot you used. I like a firm marmalade, so I let it go to the sheeting stage, but you may want to pull it earlier. I like to add my booze just as the gel stage is reached. I pour it in, turn off the heat, and gently stir while it simmers down.

Ladle into eight ounce jars, and process for ten minutes in a boiling water bath.