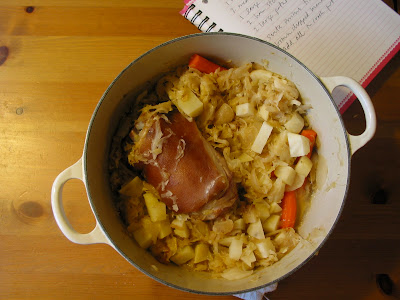 Winter solstice is here, and the shortest day and longest night is upon us. I love celebrating this event, because it means we are on the way back to longer and warmer days. Even though it won't feel like it's happening for a long time, it's still happening. The days will soon be getting longer.

As we dip into the thick of winter, I have noticed that now is also when the freezer and cupboards start to take a hit. The freezer is already low, and I will have to start looking for good prices on good local meat, in large quantities, which is how I generally work it. I was hoping for a friend to get a doe or two this season, and I was going to help her break it down. I was really excited for this: venison kielbasa, venison salami! But it didn't happen. Deer season came and went. That's when I thought I might make rabbit. I've been thinking of rabbit for a while now. And I searched high and low, but no luck.

What I was looking to make was buttermilk fried rabbit, a recipe from Georgia Pellegrini's new book, Girl Hunter: Revolutionizing the Way We Eat, One Hunt at a Time. An advance copy was recently sent to me by the publisher and I inhaled it, as fast as I could, ready to make one of these recipes.  But, the only place that had rabbit, had it frozen and $10 a pound, and I just couldn't pay $30 for rabbit. It seemed ironic to me that driving home the other day I passed a rabbit on my street that had been hit by a car. It's not a common sighting in my neighborhood, although we do have rabbits around. I couldn't help but to think, as it was quite fresh, hmmm. Is that my rabbit? But, I'm not that hardcore, and I do have a couple of squeamish bones in my body, so I declined the free meat. My fear made me think of Georgia, and her book, and what she does. One of the notes I wrote to myself as I read the sneak peak at her book was this: that woman does not look away. She is incredibly brave. She does it in a very subtle manner, so that you don't notice her grit, but once you start thinking about it you see it everywhere. There's also this: she's a great writer, of stories and recipes. 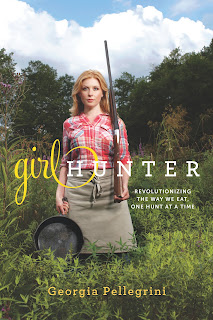 The book is laid out, somewhat similarly to her first book, Food Heroes, as journeys that focus on a type of game that she learns to hunt. There are colorful characters, mostly men, and Georgia  holds her own among them. It's a gripping and solemn book despite the somewhat tongue-in-cheek title, mostly because she takes it so seriously, both the hunting and the ethics behind what she's doing. There is some fun, a hunt across the pond that sounded like a lot of fun, and lots of whiskey drinking (though it seems no one gets drunk). I did wish I heard about some other women hunters, because they are out there. But, it's not a how-to or an overview, it's one woman's personal foray into the world of hunting,  and how it takes over her life. Let's not forget: there are many fine recipes, both for the game she hunts and their accompaniments, brines and sauces, etc. The last thirty pages or so of the book are really a quite fabulous cookbook.

As I continue to make my way in a life that favors a peasant-y, home made and home grown foods, I have often wondered when I might consider hunting. One of the things I want to start with is fishing. I'll be honest and say that I'm not sure I could be a good hunter. But I do know I am a decent home butcher, so maybe that's a start. Hunting seems to have gotten a bad rap over the past fifty years, and I wish industrialized meat had gotten it instead. Maybe we can work on that.

In the meantime, instead of rabbit or venison, today I'm making Bigos, the Polish hunter's stew, I think it's a fitting meal for a short, cold day and a nod to the hunter. Traditionally, Bigos was a winter dish, sometimes left on the stove to cook for a week, new ingredients added as they were taken out. It was also something served on the 2nd day of Christmas, so I am close. There is no set way to make it, or at least according to me, you may disagree if you are Polish! Lots of meat and lots of cabbage is the general rule. Some folks use tomatoes, I never do. I used only ham hocks for this one, but pork shoulder, sausage (kielbasa, of course) and bacon is the norm. I found that the ham I made over the summer goes very well in this, too, which is good because I've got a ton of ham steaks in the freezer.

2 medium onions, chopped coarsely
2 carrots, peeled and chopped in two (go ahead and dice if you like, I prefer large chunks of carrot)
2 medium potatoes, peeled, diced
1 medium head of cabbage, sliced finely for a nice shred
1 to 2 cups of sauerkraut
meat: kielbasa, bacon, ham hock, ham steak, venison, etc., fresh or cooked, chopped how you like it
salt and pepper to taste
secret ingredient: 1-2 tablespoons of candied pickled apples (recipe from Liana Krissoff's wonderful book, Canning for a New Generation. I can't live without this stuff!)

Sauté the onions in olive oil (or bacon fat, if you have it) until golden brown. Add the meat, and brown it. In my case, I used one large ham hock, so I just put it in on top of the onions and started adding everything around it. After browning---less if the meat is cooked already, like ham or kielbasa, a little more if it needs to be cooked---add all the rest of the ingredients. (It will be cooking for an hour or two, so no worries about being cooked through.) At this point you could take the whole shebang to a slow cooker to finish it off, which I sometimes do, with great results. Otherwise, keep it in your pot or Dutch or French oven, and cover it, keeping it at a low simmer. The cabbage will release it's water and create a great broth. You don't want too much liquid, as bigos is a dry-ish stew. Cook it for about an hour and a half. The potatoes and carrots should be tender. If you are willing to last longer, go for three hours. That's why the crock pot is nice.

Traditionally, bigos is served with mashed potatoes. Obviously, I don't do this, and instead put my potatoes right in the stew, making this a one pot (or maybe two) dish. When it's ready, I just serve hot bowls of it, with some warmed rye bread and butter.
Posted by Julia at 9:31 PM