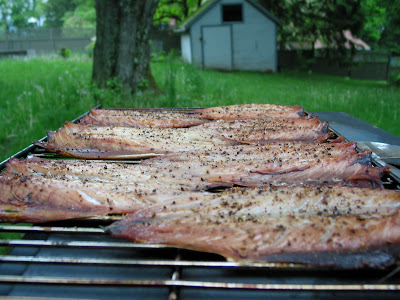 A few weeks back, I took a little trip to the south shore of Long Island. Aside from seeing family, I had an ulterior motive: to bring back a large quantity of fish to smoke. It had been a while since I smoked some trout, and I wanted more. By that I mean quantity. I had two ideas: mackerel and bluefish. I don't really love either one except for when they are smoked or pickled. Walking into the fish store I like, the first sign I saw was for Long Island bluefish, right off the boat, for $1.99 a pound. Score! It was that cheap, of course, because no one really likes bluefish. The mackerel was from the Atlantic, off the shores of Boston. I bought about ten pounds in all, and had them butterflied, with the skin left on. Back home I had to jump right into production. With oilier fishes, you don't want them to sit very long at all. Ideally, you want to catch them yourself and get them going as soon as you dock. Being quite the landlubber, except for the eating of fish, I am not yet at that stage. 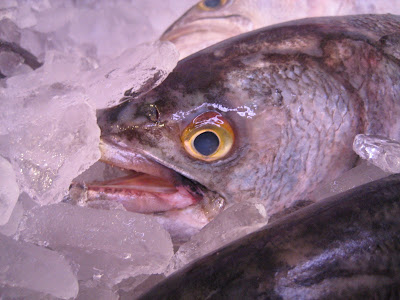 I brined them in different brines. Let them rest and dry, to form that good old pellicle, and smoked them at 190 degrees until they were done, which was about two hours. The bluefish, being bigger and thicker, took a tad longer. After they cooled they were wrapped up and put in the freezer for consumption over the year. Smoking fish does not preserve the fish. It must be refrigerated for up to a week, or frozen for up to six months. It freezes, I have learned, beautifully. Now I will always be prepared for guests, and the occasional bagel, that comes my way. 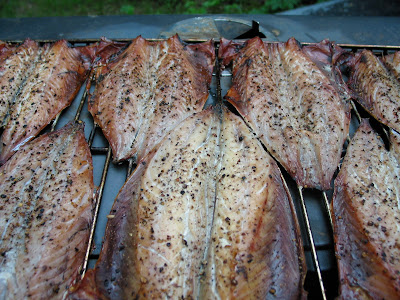 5 to 7 pounds of butterflied fish, skin on, heads removed

Dissolve the salt and sugar in the brine. If you use hot water, let it cool, preferably overnight before adding the fish. Brine the fish for three hours. Let it dry on a rack for a few hours until the pellicle forms, the fish is sticky or tacky to the touch. Hot smoke at 190 degrees from 2 to 4 hours.

Heavily coat the mackerel with cracked black pepper after the brine, before the drying.
Posted by Julia at 9:41 PM