Part Two: Guanciale
What is it about these winter-lit shots of raw meat that are so seamy? Is it the butcher paper? The crinkly plastic wrap? I don't know but these are like pin-ups. So. Ahem.

I loved the Babbo recipe, and of course referred to Wrightfood, too. (Confession: I haven't bought my copy of Charcuterie yet. So far, I'm the only person sitting at the Barnes & Noble Thomas the Train play table watching my toddler play trains while reading a book on meat curing. That may change soon, though. Either I will get the book, or more people will be reading up on guanciale while playing trains. My favorite train? Salty!)

You know, I had no idea how much I'd love guanciale. And I had no idea how different it was from bacon. I sort of thought: yeah, well, it's just more bacon, right? And that would be: wrong. After it's initial salt soak in the fridge, I hung it in the basement with a little cloth covering it. (I got an okay from guru Bob del Grosso on this; my basement is very dusty.) After two and a half weeks it felt and looked right, but it didn't lose the 30% weight. So, being that today was post day I decided to chance it and pull it. 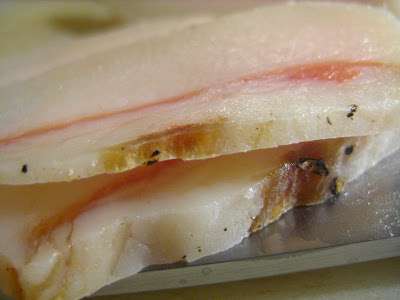 Look at that pristine white fat! I sauteed some up to make this bastardized version of an amatriciana sauce. A few slices fried up turns glassy first, and they a little browned on the edges. A taste reveals such sweetness (again, that Fleisher's meat) and nuttiness! This is what we ate tonight for dinner. Not bad for a stay at home mom whose two and a half year old is on a nap strike. 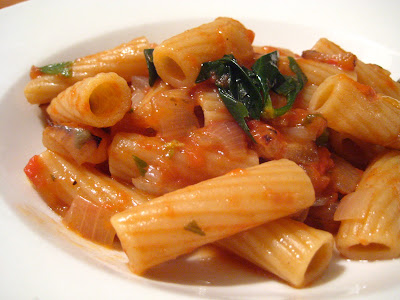 Chopped guanciale sauteed until golden. Add one medium onion, diced, saute until soft. Add one jar of sauce (homemade, canned, from my garden) slowly, until all is incorporated. Add a few chopped celery leaves (no parsley in the house, celery leaves from summer, frozen). Toss in pasta of your choice (organic wheat rigatoni), serve with pecorino shavings. Now, wolf it down and chase your toddler who is choking the cat and try to get him to sleep!
Posted by Julia at 9:42 PM