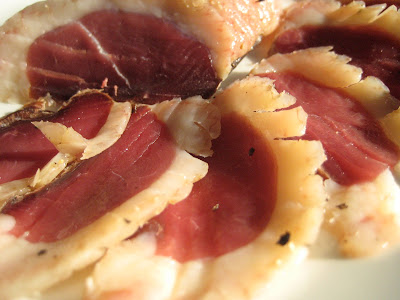 This post is my first installment of the meaty, year-long extravaganza called Charcutepalooza, co-created by the amazingly dedicated and hard-working Cathy Barrow of Mrs. Wheelbarrow and Kim Foster of the Yummy Mummy. There will be monthly postings by over a hundred bloggers on curing, smoking and salting all following recipes from the wonderful book Charcuterie by Michael Ruhlman and Brian Polcyn. Check out the Facebook page for Charcutepalooza and see what others are up to!
I already told myself that this would be the year that I would focus on preserving meat and making cheese, and it looks like I'm certainly not alone in this endeavor. About 90% of the meat our family eats is locally-sourced. And we've worked really hard at cutting down the meat consumption, both in portion size and how many times a week we eat it. Where I live in the Hudson Valley of New York, I find it's been really simple to source great local meat. Fleisher's in Kingston, the Hudson Valley Food Network's Split and Share discussion group, and wonderful farmers and their markets every week have made it easy for me to have amazing quality local meat. (Sadly, due to where I live I can't join the Charcuterie CSA at The Piggery, based in Ithaca, with CSA drop-offs in NYC).
However, the real reason I want to make charcuterie is because I love it. Like, a lot. I have many fond memories of standing on a chair with an apron wrapped around me twice, the gunmetal-colored meat grinder attached to the sink, a bowl beneath, watching, mesmerized by the meat being forced out the holes. (Best play-doh ever!) My parents always ground their own meat, and made sausages. We always had casings in the fridge. I love this stuff. It's in my blood. Last year I made bacon and gravlax, both amazingly delicious. And let's not forget the cost in purchasing charcuterie. So there you have it. The motivation is there. But sometimes even then I need a little kick in the pants.
Rewind. Back in June, I had the good fortune to attend a meat curing class taught by Peter at cookblog. Aside from learning something every time I read his blog, Peter also writes a great column in the local magazine Chronogram. I was totally excited to be in his gorgeous new kitchen (that he built) among a group of like-minded folks learning about curing whole-muscle cuts. My brain sort of short-circuited when I tasted some of the lovely things he served us, like the duck prosciutto and amazing bread (made by a friend of his, if I recall correctly) or the miso-cured bacon we gorged on at the end of the class. There was a good deal of eye rolling going on, and not in the sarcastic way. In the oh-my-god-did-I-just-eat-some-salty-heaven?? kind of way.
Like the good-natured dork I am, I asked the group (was I on a salt high?) "Who's going right home and making this stuff??" And everyone looked at me like wha? So, yeah, I didn't go right home and make the five things we learned, but I have an excuse. Did you happen to notice what kind of summer it was in my area? Probably not, but it was HOT. So hot that having hanging meat around was probably not the best thing in the world. Add that to the canning frenzy I was in, and I was a goner from the get go. But now it's winter, and I'm ready to make and eat some salty meat. So.
A few notes about making the prosciutto itself. First off, do you know Cooking Light has a recipe for this online? I was sort of surprised! It's basically just salt and duck, and some pepper or what have you. I chose black pepper instead of white pepper (um, didn't have white pepper...). I sort of timed this wrong by making it on New Year's Eve while busily preparing for the evening. No cheesecloth? No problem, I used an old linen. (I never buy cheesecloth; instead I use old, worn (clean) linens instead.) I hung them in the basement. Our basement in that corner is consistently 60 degrees. I'm not positive about the humidity, but I'm guessing it's about 60%. I based that on using our de-humidifier to roughly guess. So, I think it's okay barring the two little windows which let in a bit of light. I might need to shade them off if I do any more hanging of meat. (My fig tree is in that area, and it was supposed to be dormant but I just found a shoot coming off of it!) 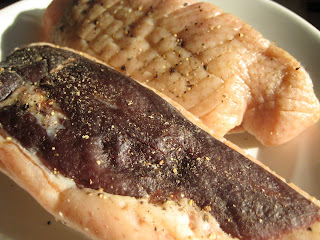 One of the things I learned was the importance of weighing the meat before you hang it, as you can judge when your meat is done by how much weight it lost during the hanging. You want to look for a 30% weight loss. I didn't weigh the breasts until they were already hanging for two days. And I'll be honest, I'm not too scientific. I pulled them a week and two days after they were hung, and I thought they felt good (not too hard, not too soft). Once unwrapped the outside seemed like it was getting a little "jerked." Once sliced the inside was garnet, and I felt maybe a hair too pink. I think it was done though, and chose not to rehang them and risk drying them too much. I'm still wondering if I pulled them too soon; I've been known to do that. A day in the fridge has toughened them and made them darker. It tastes outrageously good, duck-y, prosciutto-y, and rich. Ta da!
I don't have a recipe with which to showcase this, though I'm sure I'll just invite some friends over and eat it up, tout suite. Maybe with a champagne cocktail with elderberry syrup in it. Or in a risotto. That sounds just perfect.
Posted by Julia at 10:48 AM