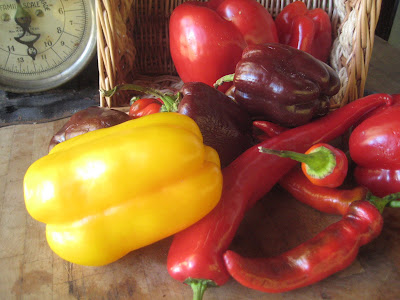 This month super spicy Kaela at Local Kitchen picked a pepper for the October Tigress Can Jam. I'll admit that I'm a total wimp when it comes to spicy stuff. Add to that a toddler in the house, and it's very rare that I cook with chili peppers. Sweet peppers are nice, but I don't have them all the time. They weren't in my garden this year or last, come to think of it. They don't normally figure into my diet. That's why I love the Can Jam. It makes me think of things I wouldn't normally think of. Like peppers. Next year I'll grow peppers. It was sort of a revelation.
Right after I bought these lovely peppers, I started getting free peppers thrown at me. So, I diced and froze a bunch of green peppers, and have a bunch of little red hot peppers drying (I do use them, sparingly, I just don't like super spicy). I chose these sweet peppers because they were so gorgeous. And so, I happened upon a recipe for marinated peppers in Linda Ziedrich's The Joy of Pickling which sounded perfectly delicious and simple, to boot.
The next day, I opened a fridge jar. They were delicious even though the recipe calls for them to sit for three weeks before eating. Simple, great as antipasto but probably just as good sauteed with some good sausage or on a pizza. And the liquid makes a great salad dressing, Linda says. However, as I stare at them in the cupboard, I keep on wondering about how much oil is in them. The National Center for Preservation has a similar recipe, albeit with a bit more acid (in the form of lemon juice) in it's ratio. I never thought I could can peppers like this, so it seems strange to me. But, this is why I'm growing peppers next year. Have you ever canned peppers this way?
Marinated Sweet Peppers
adapted from Linda Ziedrich's The Joy of Pickling
2 1/4 pounds of bell peppers (cut in thick slices, seeds and membranes removed)
3 cloves of garlic
3 sprigs of fresh herbs, I used lemon thyme
1 cup white vinegar, I used red wine vinegar (7% acidity)
1 1/2 teaspoons of pickling salt
1 cup of olive oil
Put the peppers into a large bowl and cover them with boiling water. Let them stand until they are soft.
Drain the peppers. When they are cool put them into a hot jar, one that you've already place a clove of garlic and a sprig of your herb of choice in.
In a nonreactive pot, heat the vinegar and salt. Once it boils, add the oil. Bring the mixture to a boil again. Pour immediately over peppers to cover. De-bubble, clean and seal lids. Process in boiling water bath for ten minutes. Let sit for three weeks before eating, and once open, store in fridge. 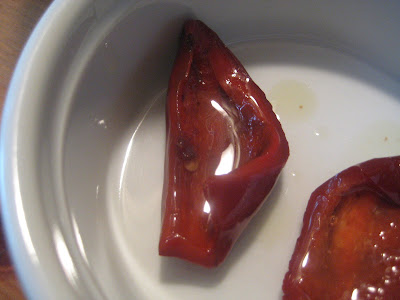