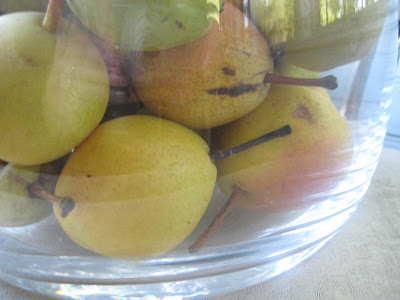 It's no wonder that artists love to work with pears. They are truly beautiful. I couldn't stop taking photos of these pears, the smallest of the almost fifty pounds of pears that I picked with Kaela of Local Kitchen. I had connected with a kindly man who owns three Anjou pear trees, and wanted to see the fruit go to a good home. I asked Kaela if she was game, and she was, not surprisingly knowing her predilection for picking fruit, and we spent a good hour or so gathering these beauties in the early morning sun. A good lot of the pears were hard and green, but they softened up quickly--maybe a bit too quickly--and I was on the move to preserve them for winter, which is now in my mind a bit more these days. 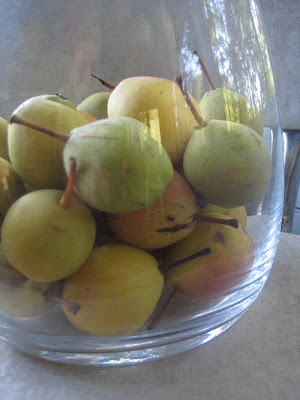 I canned many in syrup with varying spices (fennel and vanilla was one of my favorites). I also simmered some until soft for pear juice, which I froze with hopes of pear jelly sometime in the colder future. As a side note, after the juice was drained I put the pulp through a food mill and with the remaining pear-sauce I made pear butter with cardamom, again using Food In Jars' slow-cooker fruit butter recipe, which hasn't failed me yet.
I had this last batch of small ones that I wanted to can whole. Now, fifty pounds is a whole lot, as you know, and I didn't really have time for peeling. Or maybe I just didn't want to. I'll gather that the skins will be a bit tough when it's time to decant them, but I'm sure the flavor isn't affected adversely nor compromised. 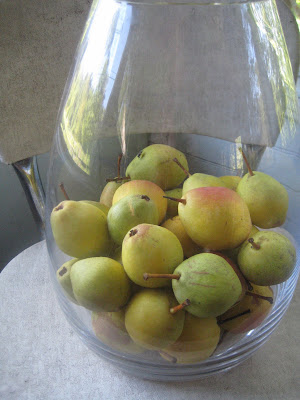 I worked from two recipes: Brandied Apple Rings, in the Ball Complete Book of Preserving and the Ball Blue Book for Brandied Pears. I really liked the idea of slicing them to display their pretty star shaped core. Might not be clever in the long run, but the up-side was the ease. I did one quart this way, two with whole pears, because it was tough for me to cut up these gorgeous pears, and one quart was halved and cored. You probably know this, but a melon baller is your best friend when you want to core halved pears. Scoop it right out! 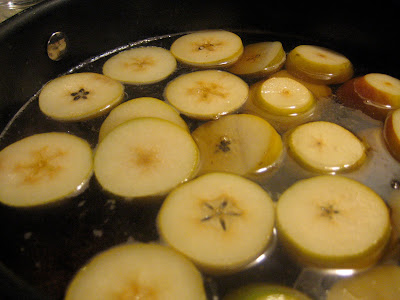 I find that in my zealous whole fruit canning agenda that's been taking place this summer, the recipe never yields enough syrup. It sort of bothers me, because then you have to make up some more, and there's the hot jars waiting for the furiously boiling water canner. But if that's the stress in my life, well then, that's not so bad, huh? 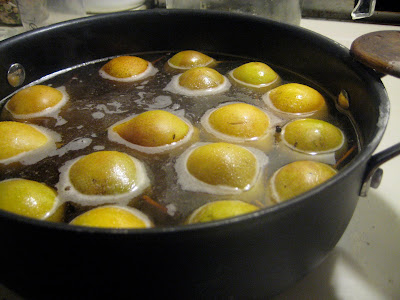 So, this yields four quarts of pears. You may peel them, if you have the gumption, and it will be all the easier when opening time comes around. I think the peels of Anjou pears might be a little tough. I've heard an apple peeler works on pears, FYI, but I don't have one, so that's hearsay. As I said, you may keep the pears whole, or halve and core them, or slice them into rounds. Put in spices as you see fit. Pears like a whole lot of things like cinnamon, ginger, cardamom, fennel, vanilla, cloves and so on.
6 cups of water
6 cups of sugar
4 pounds of pears
2 cups of brandy
Prepare your fruit. I didn't use anything to keep the fruit from browning, but I didn't peel the pears. Lemon juice works just fine, a tablespoon or two in a gallon of water should do the trick.
Meanwhile, have your hot water bath getting read to boil, and your water and sugar simmering.
The process is to put your fruit in the syrup in batches, to cook until just tender. Anywhere from a few minutes for slices, to six or seven for wholes. The color will change, and if you under cook them that is better, because they will soften in the water bath, and as they sit on your shelf.
Take the hot fruit out with a slotted spoon and place in a large ceramic or glass bowl. When you are done with all your fruit, boil the syrup for a bit to thicken--about ten minutes. Turn off the heat and add the brandy.
Then put your hot fruit in your hot jars (the ones you had in your boiling water bath, prep work, people!), add whatever spices you might want, cover them in the syrup leaving a 1/2 inch headspace, and seal. Process in boiling water for fifteen minutes.
Posted by Julia at 9:12 PM