I have this ongoing dilemma with a few vegetables. One of them is squash. I don't like it, but I want to like it. I have never given up my quest to figure out how I will like it. I found that puréed, it seems to work for me, which is not too surprising. I also found that Japanese winter squashes seem to work for me better than any other squash. Think Kabochas. They are dry and flaky when cooked, as opposed to what I've always thought of as the default squash texture: stringy and pulpy. They are also not as sweet, with a dense nutty flavor that I might even adore. These are squashes that I can eat roasted plain, with a sprinkle of sea salt.

I'm not sure I can do a squash stew, though. That might be where I draw the line.

This year I grew three different varieties of Japanese winter squash: Tetsukabuto, Hokkori, and Futsu Black. Even though I put markers on all three, by the end of the summer it was all a great mess. Covered with squash bugs, I might add. But the squash persevered and I ended up with a decent harvest of about ten or so good-sized squashes. I'm happy with that.

Roasting these dry squashes can, well, dry them out. And peeling them either before or after cooking can be a real pain. Cutting them in half, scooping out the seeds, and pressure cooking them for about five minutes on high pressure made them soft and tender, and the skin was readily removed.

Because of my aversion to squash, pumpkin butter is not high on my list of priorites. I like the idea of it, though. (Full disclosure: I like pumpkin pie! What gives?) So, I did make a batch of maple-sweetened and vanilla-spiked winter squash butter. Because the squash flesh is so dense it really only cooked for ten or so minutes, so was it technically a jam? Who knows. Even though I could tell it was good, the anti-squashite in me still refused it. So, I whisked it into pancake batter. All was well. I also made a lovely winter squash bar with a olive oil shortbread crust. All it needed, in my opinion, was whipped cream. But it was still good.

A few folks asked about the winter squash bars recipe. This is how it went:

The squash butter was inspired by this post by Grow It Cook It Can It, using maple syrup, vanilla and a bit of nutmeg. Following Caroline's instructions for her pie filling, I mixed a pint of the squash butter, a pint of milk and 3 eggs together. I followed this recipe from The Chubby Vegetarian for the olive oil shortbread. Pat the dough into a rectangular 13x9 pan, and cover with the squash mixture, then cook it at 425 degrees for 40 minutes. 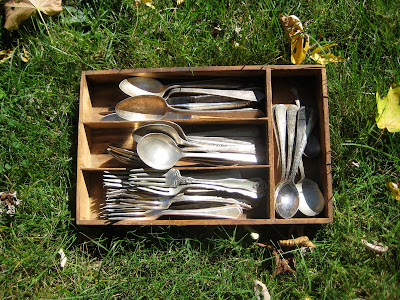 You know when you haven't written to a friend in a really long time, and there's so much to tell that it's just too much and you almost don't even want to write because it's just so big you can't even touch it? Well, that's how I feel right now. I find that when I'm in that situation I have to remind myself that it's okay. Just do a little. You can't not talk to your pal because there is too much to say, now can you?

Lately, I'm in a frenzy of getting my life straight. I've been a stay at home mom for four years. My son just started going to preschool, and it has made me feel all sorts of ways. One of the feelings I have is to gaze in stunned wonder at my house, like a haze has been removed to see an incredible, disgusting mess. Now, after all this time, I finally have a scrap of time to myself, and what am I doing? Cleaning house. Honestly, it's actually soothing. It's my inner-Anna, I've decided. (Don't you know what Downton Abbey character you are?) 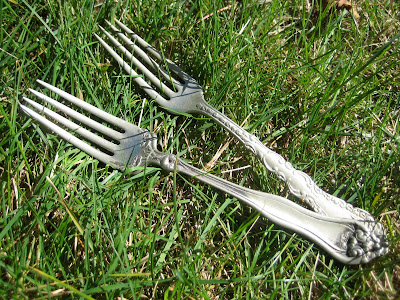 I've had this box of mismatched silverware for a looong time. Most of it's silver plated, to be sure. A lot of it I've eaten with, but when I got married I stashed it all away in place of a proper set of silverware. That wasn't silver. Anyway, I've always thought I would make something of them. A mobile, jewelry, wall hangings. Something. But I never did. I pulled them out today, and looked at each one. Why do I want these? Why do I love them so? I love their patina, I love that they are all different. I especially love the soup spoons with their obvious wear, and I can't help but to think what soup it held and who it fed? And a real soup spoon, I might add. One that holds a goodly amount of soup. Oh, those were the days...

That might be silly, but I'm a sentimental sort. That's why I am writing here about old silverware, instead of actual food or even a recipe. But I'm taking it slow, working my way around the subject. I'm still cooking and eating, of course. Today, kale and gouda turnovers were made today with suet pastry. Served with end of the season lettuce tossed with homemade (can I call it that? I really had nothing to do with it) vinegar and some good olive oil, a little sea salt. A frost is coming our way tomorrow night, the garden is closed, and it's time to pull out all the little projects that have been taking up space on the shelf. 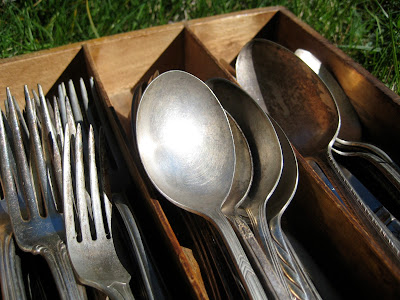